J.R. Carpenter describes herself as a “Canadian artist, writer, researcher, performer, and maker of maps, zines, books, poetry, short fiction, long fiction, non-fiction, and non-linear, intertextual, hypermedia and computer-generated narrative.” The multiplicity of modalities she ascribes to herself is instructive – those various skills and interests are also reflected in the complexity of her 2007 project Entre Ville. This project might be described as a multi-media work of electronic literature that uses still images and video as well as interactive exploratory elements. 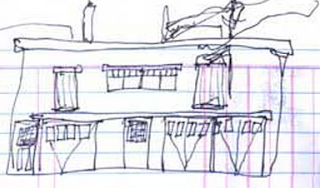 When the user begins to interact with the page, she first sees an image resembling a notebook, with a poetic text on the left side and images of a house or apartment building on the right. The windows and doors of the house are clickable, and take the user to videos and snippets of text from the poem. The overall gestalt upon first experiencing Entre Ville is of digital emulation of handmade culture: the spiral notebook, the hand-drawn images, the almost collage-like jumble of decontextualized images. This attention to hand-made artifacts is reflective of the author’s own investments in non-digital media (zines and so on). The discourses of analog / anti-digital culture (i.e., the privileging of vinyl and hand-made artifacts), on the one hand, and the contrasting pro-digital and pro-virtualization culture, on the other, are clearly in conversation in this project.

Upon further exploration, the user discovers that there are in fact two primary textual artifacts that seem to have equal importance. One is a sequence of short poems reflecting the perspective and voice of Carpenter herself. The other is a third person meditation that focuses on the dog. The two characters, one human and one canine, share and explore the city in parallel.

An essential bit of context from Carpenter (from one of the "stamps" the user can click on on the right side of the screen: "the city between us") helps frame Entre Ville:

Entre is the French word for "between," as in: entre nous, "between us". Ville is the French word for city. Driving into Montréal, all signs point to centre ville, downtown. I live north of downtown in a neighbourhood called Mile End. I work at home. My office window opens onto a jumbled intimacy of back balconies, back yards and back alleys. Daily my dog and I walk through this interior city sniffing for stories.

Here Carpenter introduces for us several of the key ideas that are reflected in the work – the idea of betweenness, the strong sense of rooting in a particular neighborhood space (which itself is a repository of diverse experiences, characters, and indeed, narratives), and the sense of “jumble.” The interface and navigation of Entre-Ville requires a degree of exploration and a certain amount of patience with different elements that are organized non-hierarchically and indeed non-linearly. In other words, the site itself is a jumble, and our exploration of it mimes the Carpenter’s exploration of her neighborhood and the city more broadly.

In an intimacy
born of proximity
the old Greek lady and I
go about our business.
Foul-mouthed for seventy,
her first-floor curses fill
my second-floor apartment;
her constant commentary
punctuates my day.

[…]
Always civil,
the old Greek Lady and I
wave to each other.
To each her own. Undies,
bed sheets and bras
dance on the line -
a delicate curtain
to separate
her balcony
from mine.

The second stanza of “Saint Urbain Street Heat” offers a vivid image instantiating the “betweenness” Carpenter alluded to in the paragraph above. Here, the author’s neighbors and her spaces are intimately – and often uncomfortably – intertwined. She hears her neighbors profanity through the thin walls of an old house. She sees the neighbor's underwear on the clothesline daily; these are both a window into the intimate life of the neighbors but they also serve as “a delicate curtain/ to separate / her balcony / from mine.”

The second narrative Carpenter gives us is “Sniffing for Stories.” This one only becomes visible to the viewer if she clicks on the image of the dog (presumably an image of the author's actual dog, which we see in a video elsewhere on the site). The dog becomes a character and a recognizable fixture in the author’s neighborhood – from the poem, we learn that the dog is more visible and recognizable than her owner in some ways. The “dog with the orange ball” is known to the neighborhood children and even to strangers. 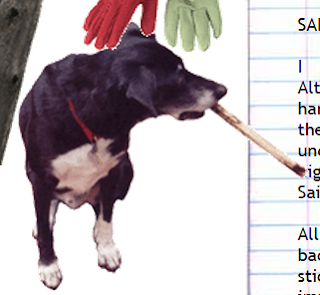 The physical needs of the dog require the author to walk through her neighborhood and encounter the multitude of its diverse residents. The dog’s desires – its need to “sniff for stories” -- is thus a proxy for the author’s own yearning to reach out and encounter her neighbors, to absorb their stories into her own account of her experience of the Mile End neighborhood of Montreal. “We walk as if intent on studying every scent.”


Finally, it’s worth mentioning that Carpenter has a section of the site that links to other authors’ works: “entre guillemets” (French for in quotations or between quotations). Here the user can access a rotating selection of quotes from poets and novelists such as Nicole Brossard, Anne Carson, Leonard Cohen, David Fennario, and Heather O’Neill, among others. Many of the passages directly speak to life in Montreal (including a passage from Defoe’s Moll Flanders that directly alludes to the Mile End neighborhood, which in the 18th century at least was a place where a prostitute and her john could be “as wicked as we pleased”). Others invoke the conceptual framework that structures both the content and the form of Carpenter’s project. The overall effect of these intertexts is to add an additional dimension to the “in-betweenness” to Entre Ville. We are in-between spatially, socially, and textually.

Posted by electrostani at 5:09 PM