The keynote, on the history of the Wiki idea, was given by John Maxwell. He started with a quote from Ivan Illich from 1973, on "Tools for Conviviality." I'll just post the whole quote, since it's interesting:

“Convivial tools are those which give each person who uses them the greatest opportunity to enrich the environment with the fruits of his or her vision” Industrial tools deny this possibility to those who use them and they allow their designers to determine the meaning and expectations of others. Most tools today cannot be used in convivial fashion.

In effect, a highly open-ended tool like a Wiki is a 'convivial' tool, while other, more strictly hierarchical, means of structuring knowledge are more "industrial."


Maxwell talked about the creator of the first Wiki, Ward Cunningham. Wikis were named after the Hawaiian "Wiki-Wiki Bus," and initially written using the early Mac HyperCard software. Cunningham went on to create the first Wiki website, called WikiWikiWeb, focusing mainly on creating a base of knowledge about software development.

Cunningham defines a Wiki as "a body of writing that a community is willing to maintain." Maxwell, in his comments, expanded on this, describing Wiki writing as "the textual embodiment of a community of inquiry" and as "collective autoethnography." What he finds remarkable about the Wiki framework is that it's a software system "that has no features"; it's effectively just a system of writing. Maxwell also talked about some of his own experiences using Wikis in his research ("Coach House Technological History").

At the end of his talk Maxwell talked about Ward Cunningham's fascinating recent shift away from his own creation -- the idea of a community-edited, but still centralized, body of knowledge. Ward has now invented a new model of a distributed Wiki system that he calls a "federated" Wiki.

Cunningham talks about the reasons for the shift in this article in Wired:


But there is one thing about the wiki that he regrets. “I always felt bad that I owned all those pages,” he says. The central idea of a wiki — whether it’s driving Wikipedia or C2 — is that anyone can add or edit a page, but those pages all live on servers that someone else owns and controls. Cunningham now believes that no one should have that sort of central control, so he has built something called the federated wiki.

This new creation taps into the communal ethos fostered by GitHub, a place where software developers can not only collaborate on software projects but also instantly “fork” these projects, spawning entirely new collaborations.

To me, it seems like there’s an unresolved contradiction here: Cunningham started out wanting a centralized index with multiple authors. When that worked -- almost too well -- he changed his mind, and wanted to decentralize his own index, achieving multiplicity not just of authorship but of web domains.

I think many people share Cunningham's ambivalence about centralized knowledge. On the one hand, don’t we want there to be authoritative references out there? The feminist DH critique of the male-centered tendencies in Wikipedia (who edits it, who contributes “knowledge? see this) is in a way accepting the premise that Wikipedia is a powerfully central site for knowledge production and distribution. Insofar as centralized knowledge production is still a widely felt social need, perhaps we need a better, more diverse Wikipedia, not a decentralized, confederated Wiki system where everyone creates and curates their own bases of knowledge.


During the break, I said as much to a faculty member from a University of Wisconsin campus (I didn't catch her name); she mentioned to me that this debate over the centralization of knowledge was in fact happening in the 18th century as the first Encyclopedias were being compiled. She mentioned a book that sounds relevant, Seth Rudy's Literature and Encyclopedism in Enlightenment Britain.

The lightning sessions had many interesting papers. Because these are works in progress, I won't say too much here. I will say that the papers I was personally most interested in were both by graduate students from the University of Victoria itself, and both involved applying various mapping visualization techniques to works of literature. Alex Christie's Z-Axis 3D maps are far enough along that he's collaborating with Modernist Studies Asociation members and planning a session at the MSA that will showcase the methodology at MSA 2015 later this year. Randa Khatib has, in conjunction with colleagues in computer science at the American University of Beirut (which has its own Digital Humanities Center!), developed an installable tool called Topotext, that automatically annotates text files, using natural language processing to extract geographic data.

On my own, I installed Topotext from the version I found on Github at the link above, and played around with a .Txt version of A Portrait of the Artist as a Young Man. 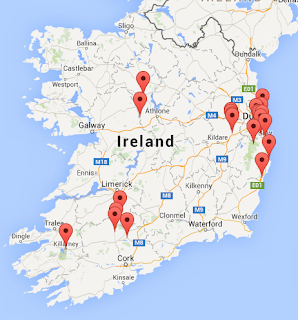 The concentration of location on the east of Ireland should be obvious for those who know the novel. But what's interesting are all the references in the southwest of Ireland. It's easy to forget the trip Stephen takes with his father early in the novel to Cork, and think, instead, of Portrait as first and foremost a Dublin novel. But that trip to Cork is of course important, both to Stephen's development of his sense of space, and to the concept of Irish space in the novel more broadly. There's more we could say here, but suffice it to say for now that it seems like the Topotext tool has justified its existence here by getting me to think about Portrait's relationship to space in Ireland a little differently than I had before.
Posted by electrostani at 8:39 AM No comments: