I've recently been working on rebuilding a collaborative class project on Claude McKay's Harlem Shadows in the Scalar platform. As I've been putting the new site together, I've also been adding fresh material to the project, including a number of McKay's early political poems. (I've also been using Scalar for my Kiplings and India project.) It's a powerful platform, especially with regards to metadata, annotations, and tagging. It's also designed to allow you to create multiple "paths" through overlapping material. In McKay's case the Paths feature comes in particularly handy as he tended to publish the same poems in different venues; it's revealing to see which poems he tended to republish and which he quietly "put away."

The new site can be accessed here. I would particularly recommend readers play around with the Visualizations options on the menu at the top corner of the screen.

Here is the text of some new material I've added to the site, analyzing, in a very preliminary and informal way, a couple of network diagrams I generated using Scalar's built-in visualization tools.

Below I'll present two different network diagrams I've derived from Scalar's built-in visualization feature. One looks at the clusters created by thematic tags, the other looks at the relationship between poems published in different venues.

Skeptics of Digital Humanities scholarship sometimes see objects like network diagrams and wonder what they might tell us that we don't already know. And indeed, even here, to some extent, the diagrams below do show us visually some things we might have been able to intuit without the benefit of this tool.  I should also acknowledge that the thematic tags we have been using are somewhat subjective. We have the poem "A Capitalist at Dinner" tagged by "Class" but not by "Labor." Others might structure these tags differently and end up with diagrams that look different.

That said, there are some surprises here. In McKay's poetry I'm especially interested in thinking about the connections between the two streams of his writing from this early period, which we might loosely divide into a) political poems (including race-themed poems and Communist/worker-themed poems) and b) nature-oriented, pastoral and romantic poems. At least in terms of publication venue, there is quite a bit of overlap between these two broad categories. McKay excluded the most directly Communist poems from his book-length publications, but he included—often at the urging of his editors—poems expressing decisive anger at racial injustice in American society. And even in the body of poems published in magazines like Workers Dreadnought there are hints of the nature themes in poems like "Joy in the Woods "and "Birds of Prey." The network diagrams show us a series of other poems as well at the "hinge" between the two clusters. These poems might be particularly worthy of special attention and study in the future.

Take a look at the following network diagram showing the relations between a limited set of thematic tags, generated by Scalar using the built-in visualization application. The image below is a static image, but if you click on VISUALIZATIONS > TAG on the menu in the corner of this site, you'll get a "clickable" diagram that is also live and manipulable. The body of poems included here is comprised of all of the poems from Harlem Shadows as well as about fifteen of the early poems not included in Harlem Shadows. 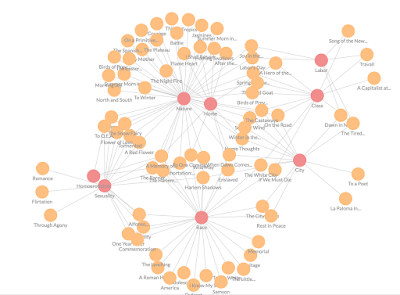 (See the full-size version of this diagram here)

What does this diagram show? First, we should note that the red dots show tags, while the orange dots show poems. As of November 2016, only eight thematic areas have been tagged: Race, Class, City, Nature, Home, Sexuality Homoeroticism, Labor. (More Tag information from the earlier, Wordpress version of this site is currently in the Metadata for individual poems, and is discoverable using the search function on this Scalar site. Try searching for "Birds," for instance.)

What Can We Learn?

1. Thematic Clusters. First and most obviously, certain themes are "clustered" together. Nature and Home have many overlaps, and thus appear clustered. Sexuality and homoeroticism also form a cluster. And finally, the tags focused on Class, Labor, and city life also form a natural cluster, though the clustering is significantly less tight than the others.

2. Centrality of Nature. An obvious discovery is that "Nature" is one of the most common tags in McKay's early poetry. This was a surprise to the students in the Digital Humanities class (given that we think of McKay as a black poet with militant/leftist politics, we might expect those themes to be more dominant). Of course, many of the poems marked "Nature" also overlap with race, class/labor, or sexual/queer themes. The surprise in finding so much discussion of Nature—and specifically McKay's interest in writing about birds—might remind us that we actually need to read a poet's poems before rushing to narrowly define them (i.e., as a black, political poet). (I would encourage visitors to look at Joanna Grim's essay exploring the "bird" theme in Harlem Shadows)

3. Home. Many of McKay's poems in this period thematize his memory of life in Jamaica. Thus, a few of the poems (for instance, "The Tropics in New York") reflect McKay's nostalgia for his pastoral upbringing from the vantage point of someone now living in a much larger, modern urban setting.

4. Poems with three or more tags. I'm interested in the poems that presently have three or more tags: "The Barrier," "The Castaways," and "On the Road." These are poems that scholars may not have paid very attention to in the past, but diagrams like the one above might lead us to think of them as newly important as they bridge some of McKay's most important themes from this period. (Again, the number of tags is a bit arbitrary and at present an artifact of the way metadata has been tagged. At most this information might nudge readers to pay a bit more attention to some poems rather than others, not to make any sweeping conclusions about the poems as a whole.)

I would encourage users of this site to play with the live visualization tool and send me (Amardeep Singh) any screen captures that seem interesting or telling.

This diagram is a bit more messy. It contains nodes for publication venues (which are organized on this Scalar site using "Paths"). These appear in light blue in the diagram below.  Users can access a "live" version of the diagram using VISUALIZATIONS > CONNECTIONS in the menu in the corner above. 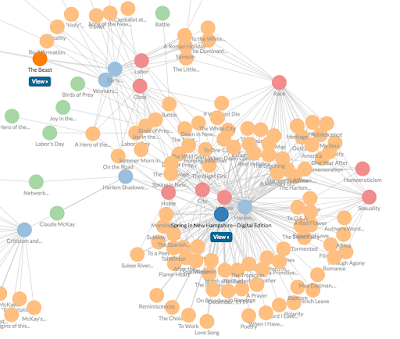 (See the full size version of this diagram here)

Essentially there is a larger cluster around Spring in New Hampshire and Other Poems and Harlem Shadows, and a smaller cluster around the Workers Dreadnought path and the Early Uncollected Poetry path I've constructed on this site. Perhaps not all that surprisingly, the sexuality and homoeroticism tags are mostly entirely disconnected from the labor & class oriented poetry published in magazines like Workers Dreadnought.  But there are some poems right in the middle between the two clusters that seem especially interesting to consider -- poems like "Joy in the Woods," "The Battle," "Summer Morn in New Hampshire," "Birds of Prey," and "Labor's Day" that appear with strong connections both to the "Nature" tag and to "Class" and "Labor" tags. Though few of these poems have been looked at closely by critics, they are in some ways the key to understanding the two major aspects of Claude McKay's poetry in this period.
Posted by Amardeep Singh at November 15, 2016
Labels: Academia, Caribbean, Diaspora, Digital Humanities, Modernism, Poetry, Transatlantic
Newer Post Older Post Home