Our visit to Trinidad coincided (purely by chance) with the national T&T holiday known as Indian Arrival Day, as well as a 20/20 Cricket match between India and the West Indies in Port of Spain, and we were able to experience a bit of both. My son also really enjoyed seeing nesting Leatherback Turtles (in Tobago), as well as various rainforest snakes and birds (Tree boas! Scarlet Ibises!). And we had a superlative experience staying at Pax Guest House for three days in the foothills of the northern range. 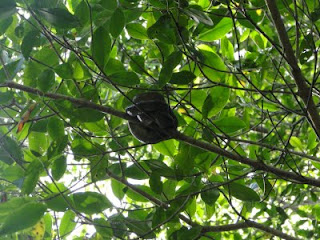 The conference I attended seemed to be very well-organized, with some snafus here and there –- the keynote by Leela Sarup, for one thing, wasn’t announced on the web version of the program, so I didn’t learn of it until after it had already happened.

The quality of the presentations was also a little uneven, with non-academic rants and reflections mixed in with traditional academic papers. Sometimes this led to intriguing chemistry, other times it just made for wasted space. While the conference did describe itself as focused on “Global South Asian Diasporas,” the most interesting discussions really had to do with the Indo-Caribbean diaspora – but of course that’s perfectly fine.

Literature. This was not really a literature conference, but there was at least one panel on Naipaul, and I was fortunate to meet two Indo-Caribbean writers, Cyril Dabydeen (who is from Guyana originally, and lives in Canada) and Raymond Ramcharitar (who is from Trinidad and continues to live there), in person.

At the Naipaul panel, I enjoyed papers by Nivedita Misra (a recent immigrant to Trinidad from Delhi) and Kevin Baldeosingh. Misra did a helpful survey of Naipaul’s various writings on India, arguing that his Trinidadian / diasporic background remains the central lens through which he sees the “homeland.” And Kevin Baldeosingh helpfully mentioned and quoted from some Indo-Caribbean writers besides Naipaul – including Harold Sunny Ladoo (“Yesterdays”) and Raymond Ramcharitar (“The Island Quintet”).

At another panel, I was happy to see the poetry of my friend Christian Campbell cited as part of a paper on Indian women and Chutney music. The poem cited was “Curry Powder,” which is about Campbell’s Indo-Caribbean grandmother – who married an Afro-Caribbean man, and left her Indo-Caribbean / Hindu heritage behind. The full text of Christian’s (remarkable) poem can be found here: link; here is an excerpt:

Coolies and niggers fighting these days
But great-grandmummy Nita did not fight
When she found herself facing the West
Instead, touching the Negro face of a Bajan,
Manny. She did not wear saris no more.
Calypso she liked and could wind down
With the best of them. She became deaf
To the ethereal ballad of Krishna’s flute.
She chose Manny, not Lord Rama in her
Hindu epic gone wrong. At her wedding
She never once uttered Ganesh'sname
And she loosened the grasp of Vishnu’s
Four hands from round her waist.
So her sisters disowned her in the holy
Name of Mother India. But she made
Dougla babies anyway and did not give
Them the sacred names of gods: Brahma,
Shiva, Gauri. She named Grandaddy
Leon, a good English name, like all the other
Rootless Negroes. And so Trinidad became herself.

Race Relations. One of the deficiencies of the conference was a seeming reluctance to engage with the issue of the sometimes vexed relations between Afro- and Indo-Trinidadians. There were Afro-Caribbean presenters, moderators, and audience members around, but people generally didn’t seem that interested in talking about some of the problems between the two commuinities. By contrast, if you look at the writings of Raymond Ramcharitar at the TT Guardian, you see an enthusiasm for tackling this sticky subject -– and not shying away from the seamy underbelly of Trinidadian history in the interest of an anodyne multiculturalism. See Raymond’s blog, archiving his TT Guardian columns here: Trinidad Media Arts and Culture. I don't know if everything Raymond says is correct or verifiable -- there is a fair amount of bitterness in his writing that makes me wonder -- but it's at least interesting reading. Here's a bit of one of Raymond's recent columns, outlining the history of racial conflict between Indo- and Afro-Trinidadians in the 1990s:

All this was allowable in the name of Ken Gordon’s “press freedom” —which also allowed Indian Review Committee agents (Anil Mahabir, Rajnie Ramlakhan etc) into the daily press to spew Hindu fascist rage and racial contempt for AfroTrinidadians. This was exactly what the Creole world believed all Indians were like, so (in their minds) justified talk radio’s filth. “Indian” talk radio content was a stream of bewildered rage that this was happening in daylight.

The PNM still lost the 2000 election, but when they were “let back in” by Ramesh Maharaj and PNM stalwarts ANR Robinson and Abu Bakr, in 2001, they mobilized their police, judicial, and media arms. The media spread the gospel: the UNC (Indians) were all corrupt, evil, and tiefed from “real” Trinidadians. The judiciary and police initiated lengthy, public prosecutions of the Indo Chief Justice, Sat Sharma, the Indo chief doctor, Vijay Naraynsingh, and Indo voter padders (all acquitted).

The disengagement with race-relations issues was particularly awkward at the Naipaul panel near the end of the conference. It seemed that no one on the panel really seemed to have noticed that Naipaul’s early novels, including the canonical House for Mr. Biswas, are often contemptuous in their engagement with the Afro-Trinidadian community. (Enough so that Walcott famously wrote a rejoinder in “The Fortunate Traveler, mocking Naipaul as “V.S. Nightfall”). The black characters are subservient (like “Blackie” in Mr Biswas), and there’s generally little reference to the class of upwardly-mobile and ambitious black Trinidadians Naipaul would have met at Queen’s Royal College in Port of Spain. (Some of these figures do appear in later books like A Way in the World, but they are often hysterical figures or desperate showmen. It is difficult to think of even one affirmative portrayal of a black character anywhere in Naipaul's writing...)

Dance and Music. If race-relations was a bit of a blind spot at this conference, the discussion of music in particular was much more satisfying. A book that seems to have been influential for people doing cultural studies of Indo-Caribbean musical culture is Tejaswini Niranjana’s “Mobilising India” (Duke, 2006). It was cited in both of the papers I saw that dealt with Chutney Soca music. It’s available on Amazon via Kindle ($13) or more for the regular book.

One presenter, Ananya Kabir, was working on the phenomenon of Indo-Caribbean women engaging in “wining,” which is a highly suggestive kind of dancing. It’s normally associated with Afro-Caribbean women dancing to reggae, rapso, or soca, but it’s also quite common with Indo-Caribbean music, especially around Carnival time. You can see the trailer for Jahaji Music here:

Pichkaree Music. Another presenter gave a very interesting paper on a kind of music called “Pichkaree” music after the tube that is used to spray color at Holi (known as Phagwah in Trinidad). Pichkaree music could be defined as “conscious Chutney” – equivalent perhaps to “conscious” reggae and hip hop in black diaspora music. One major veteran of Pichakaree music, Ravi Ji was actually in the audience. I spoke to him after the panel briefly and asked him where I could find his music: “We didn’t have money to record much of it.” This is sad, though Ravi Ji did assure me that more recent generations of Pichkaree performers have been recording their music.

Meanwhile, you can read some columns by Ravi Ji at the TT Guardian if interested.

The same presenter, Sharda Patesar (a graduate student at the University of Trinidad and Tobago) also mentioned that the emergence of Pichkaree music had something to do with the apparent rise of anti-Indian lyrics in Calypso music beginning in the 1970s. (I tried to confirm this online with examples, but couldn’t find too many. At the Trinidad and Tobago News, there is even a discussion disputing the basic premise that there are in fact Calypso songs with anti-Indian lyrics. In his recent column, Raymond Ramcharitar does mentino two songs from the 2000s, “Kidnap Dem” by Cro Cro and Singing Sandra’s “Genocide,” as having lyrics along these lines.)

Manuel pointed out that you can find Trinidadians who still practice very traditional Bhojpuri folk forms, such as “Chautal” and “Birha”.

He also had some interesting comments on the style of drumming called Tassa – that is prevalent in Trinidad but not so common in India itself. Manuel seemed to suggest that in Trinidad that Tassa drumming has become something more complex and “virtuosic” than it is anywhere in India.
Manuel has produced a documentary called “Tassa Thunder,” which is excerpted on YouTube here:

Language. There’s a fair amount of Hindi in Chutney soca music, mostly derived from Hindi film songs, but it seems the vast majority of Indo-Trinidadians have lost access to Bhojpuri or Hindi. Hindi has been introduced in many Trinidadian public schools, but it’s not clear whether that will lead to a substantive increase in the number of functional Hindi speakers in Trinidad.
It was curious at first to hear the Pujari at the Mandir at Waterloo doing interpretation in English (in between hymns sung in Hindi). But of course it makes perfect sense – and it probably won’t be long before we start seeing Hindu and Sikh services that resemble this approach in the U.S.

Jhandis. One of the things you notice around Trinidad are the “jhande” – little colored flags. (Trinidadians call them Jhandis.) There is of course a tradition of using Jhande at specifically Hanuman mandirs in India, but in Trinidad (and other parts of the Indo-Caribbean world), the “jhandi “ has become much more widespread than that –- many Hindu households use them to mark their houses at the font gate. Posted by electrostani at 11:12 AM