A Response to Frank Gunter's "Myths About Poverty"

Professor Frank Gunter’s YouTube video, which was originally posted on the Lehigh College of Business’ official YouTube channel, has generated considerable debate, especially among Lehigh’s student body. (Get the full background, including a sampling of reactions, by reading this Brown and White story)
Responding to the controversy, Prof. Gunter says, “Attack my data, attack my analysis, but attack me? You don’t know me.” Fair enough: my goal here will be to challenge Prof. Gunter’s data and analysis. Admittedly, I am not an economist; I teach in the English Department. But I believe the real problem with Professor Gunter’s slides is a matter of how he frames his arguments and the language he uses, not necessarily the data itself. Let’s look at each of his three main points in turn.
1. “Poverty is Not a Matter of Race” 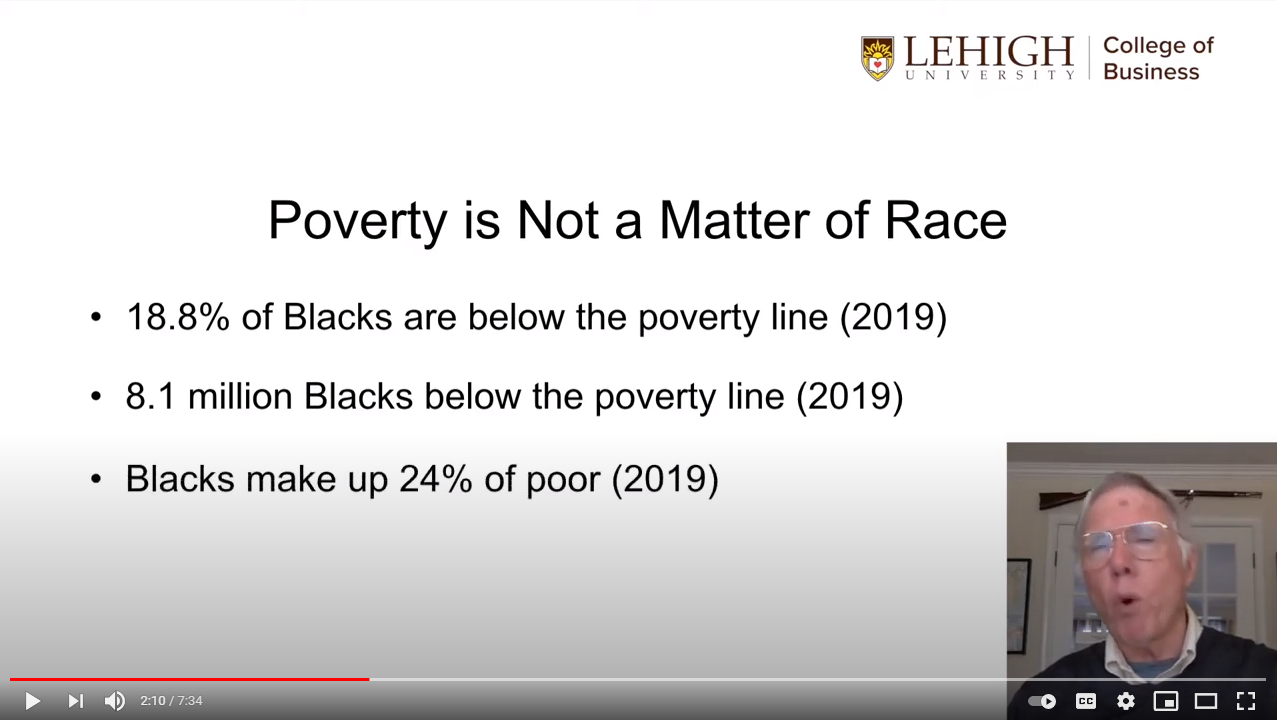 Let’s start with Gunter’s first Myth, “Poverty is Not a Matter of Race.” Prof. Gunter appears to be deriving his data here from a U.S. Census study, which has statistics for 2019 that closely align with the three data points given in the slide above.

Just for reference, here is a more detailed summary of Prof. Gunter’s main arguments from the Brown & White:

“Are (Black people) disproportionately represented? Absolutely, but what if we looked at the 2019 data and the numbers were reversed? What if we found that 80 percent of Blacks were below the poverty line and three-fourths of the poor in America were African American,” Gunter asked. “What would be the policy implication? If that was what the data found, I would say we have a severe racial problem in this country that is as bad as it was during Jim Crow in the 1930s and 1940s, but what conclusions can be made with the information we have, that 18.8 percent of Blacks are poor and 24 percent of the poor are Black? There is probably a racial element there, but race can’t be the whole answer because the majority of the poor are white.” (link)

Gunter’s citation of these statistics is highly selective. Most problematically, he neglects to mention the relative size of the Black population against the total U.S. population. “Blacks make up 24% of [the] poor” in the U.S., yes -- but given that they make up about 12% of the total population that is quite clearly not the whole story. This is actually a pretty elementary statistical mistake, and frankly, I’m a bit surprised someone with my colleague’s credentials and experience would make it.

Moreover, the very same U.S. census study that is the source of these claims also clearly points to a continued correlation between race and economic status. Take a look at this chart: 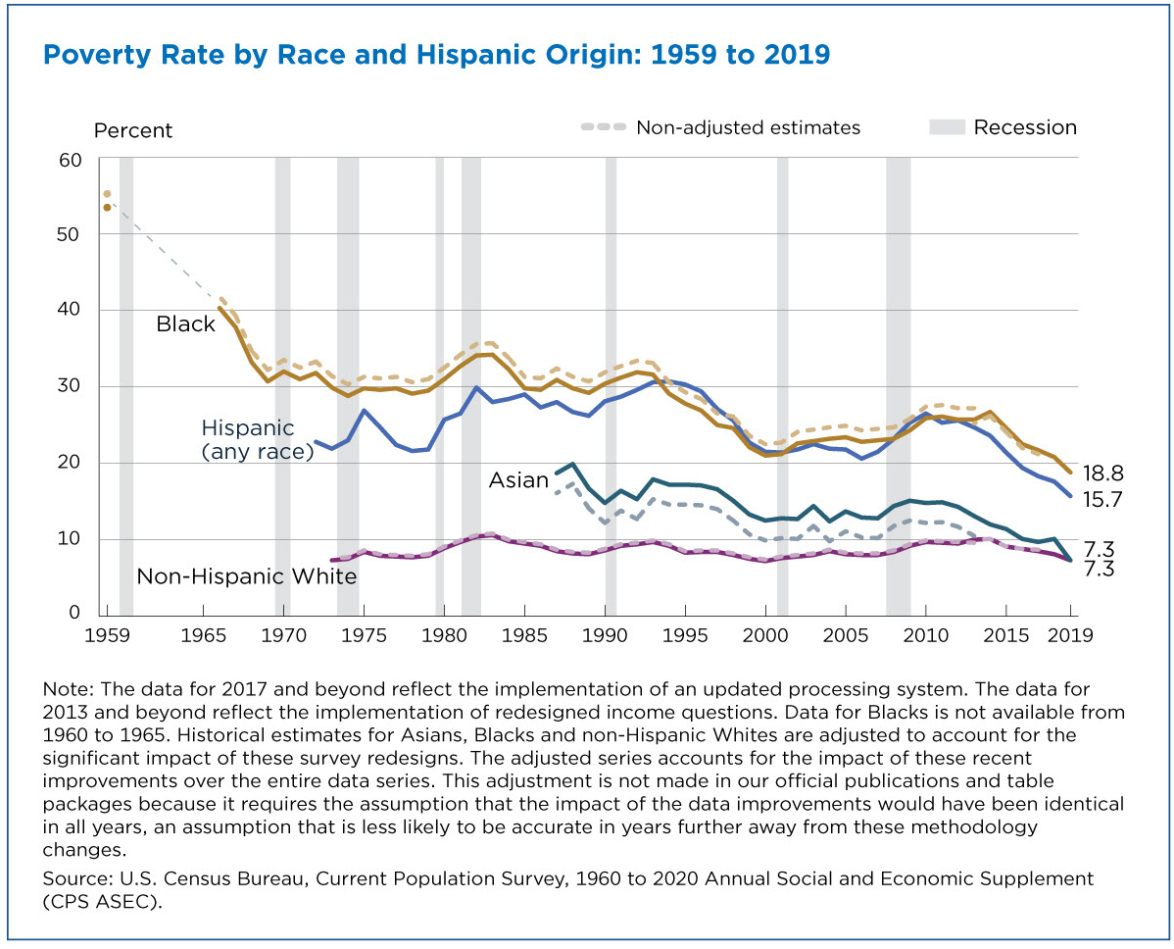 (source)
As of 2019, 18.8% of Black Americans and 15.7% of Hispanics lived in poverty. Meanwhile, 7.3% of Asians and Whites were in poverty. There is clearly a correlation between race and economic status; Professor Gunter’s slide title, “Poverty is Not a Matter of Race,” is simply not supportable.

If we want to discuss how and why that improvement happened -- and how we can continue to reduce the correlation between race and poverty, as well as poverty rates overall -- that might be a productive conversation to have. In the meanwhile, it remains true that there is a correlation between race and economic status, so Gunter’s statement that “Poverty is Not a Matter of Race” is not accurate.

(Incidentally, careful readers might note that this data runs through 2019; 2020 was, needless to say, an epic disaster of a year, including for the economy. It's very possible that poverty numbers and trendlines will all look very different when we start to see the full data from last year.)
2. “Poverty is Not a Generational Trap”

Here is Prof. Gunter’s second major point: “Poverty is Not a Generational Trap.” 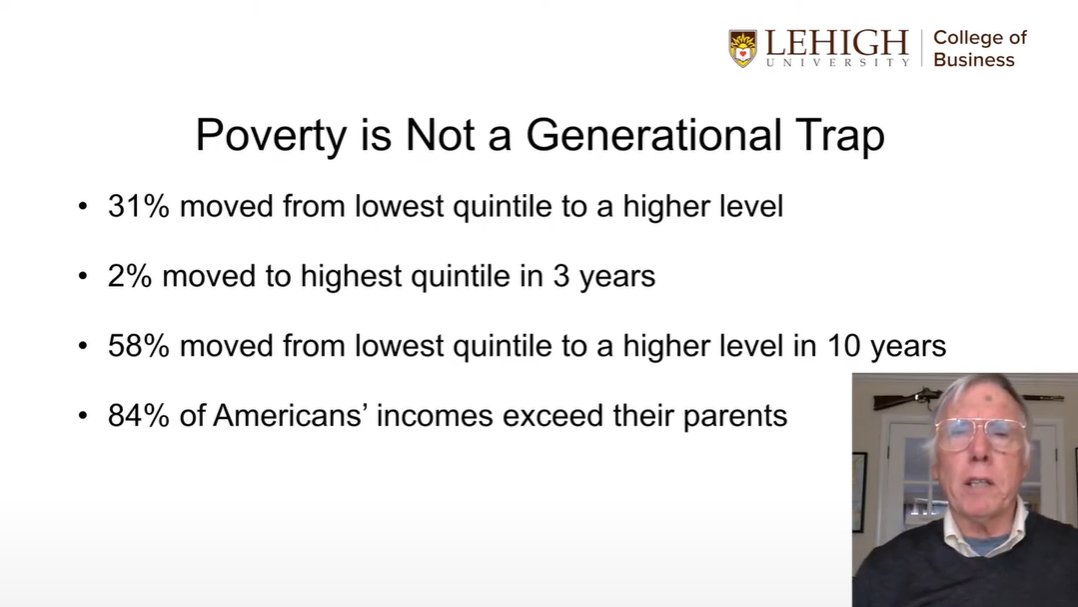 I am not going to nitpick this data, though again Prof. Gunter’s use of statistics seems selective. (I am also unclear exactly where he is deriving this data from, though just Googling some of these numbers leads to this story from the conservative American Enterprise Institute, which in turn derives its data from a study done by the Federal Reserve Bank of Minneapolis. I have not at this point looked closely at the study's methods or underlying data. It might be interesting to do so.)

First, generational poverty is a well-established phenomenon that has been widely studied by social scientists: a good place to start might be this study by the National Center for Children in Poverty; that study shows a strong correlation between poverty experienced in childhood and the likelihood of experiencing poverty as an adult. The correlations between race and generational poverty have also been widely studied and discussed in more formal academic studies; a good place to start might be this study by Chetty et al. (2018). Indeed, this study (shared on Twitter by Prof. Dominic Packer) suggests that if anything Black Americans remain highly likely to fall down the economic ladder, rather than rise up.
Incidentally, one of the studies I linked to above was unpacked and explained in detail by the New York Times here. The Times produces some nifty visualizations and animations to drive home the point; here is one I particularly like, because of 1) how it shows how poverty is passed down generationally, specifically for Black men, and 2) how it introduces another variable we haven't been talking about, namely gender: 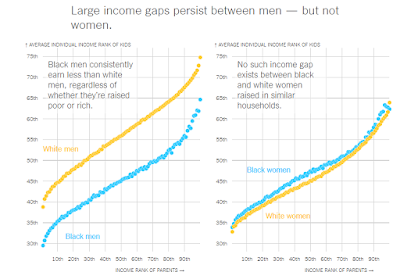 (source)
Note that the chart on the right above does not show that Black women and white women have earning parity; rather, it suggests that white women with poor parents and Black women with poor parents are likely to reach the same outcomes. Whereas Black boys and white boys have a huge gap.
Would anyone say that it’s impossible to move out of poverty across generations? No -- but that would be what we English teachers call a “straw man” argument. A more salient question might be: if we accept the vast array of data that shows that intergenerational poverty is real -- and that race is an important part of that story -- what are effective strategies for combating it? Are there other countries that have done this better?
It's probably also worth mentioning at this point that the focus on the poverty line obscures other ways in which economic status and race are passed down generationally. If we look at generational wealth transfer, the gap between white and Black is pretty stark. The Brookings Institute has, for instance, this stunning chart showing median net worth by race. While the poverty rate numbers mentioned above appear to show improvement, this data shows little to no improvement at all; if anything, it shows a growing wealth gap. 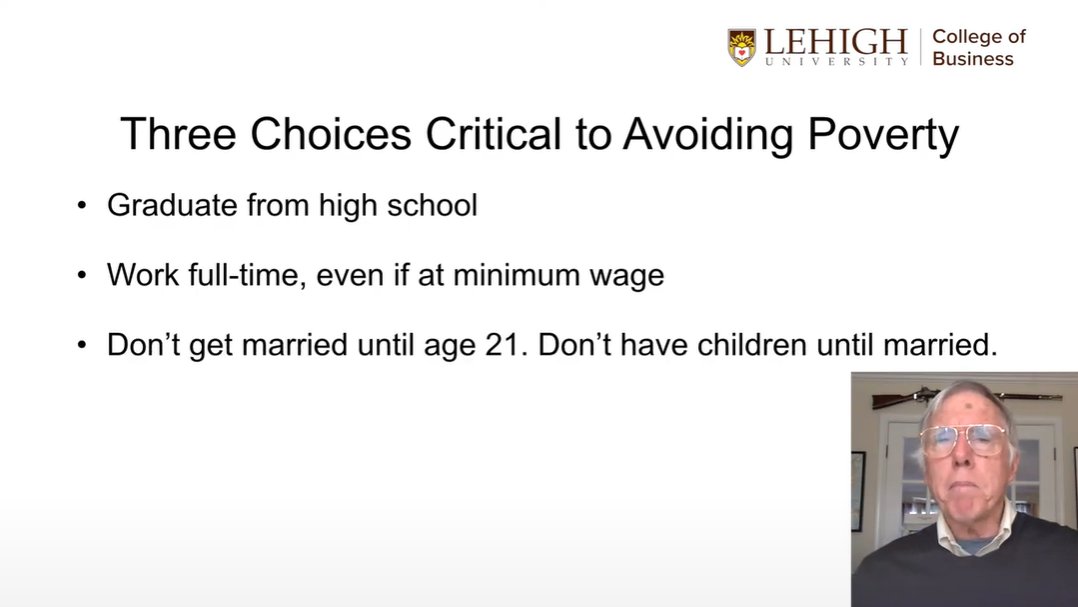 Here, Prof. Gunter tells us explicitly where he’s getting his data from -- a Brookings Institute study (Haskins and Sawhill, Creating an Opportunity Society [2009]).
Again, I’m grateful to Prof. Packer for pointing us to a helpful Vox.com account of this study and the way it’s been misleadingly cited by conservative economists. I won’t go deep into the numbers, but framing these three behavioral “norms” as choices is misleading. Whether or not you graduate from high school has a lot to do with the kind of school district you are in; whether or not you can work full time depends a lot on underlying economic conditions (and more and more Americans find themselves as gig workers or ‘independent contractors’ who are denied full-time status); and when people have children is, again, often not always entirely under their control.

At the end of the story above, Dylan Matthews writes:

I believe Professor Gunter’s YouTube video uses data misleadingly, though the real source of the visceral reaction many students have had to his arguments probably comes from his language and rhetoric.
If his first slide had said “U.S. Census Data Suggests Poverty Rates are Declining for Black Americans,” instead of “Poverty is Not a Matter of Race,” frankly, I doubt we would even be talking about this. So the first takeaway is: how you frame arguments and the language you use matters.
Second, for all of the topics covered, both Prof. Gunter’s comments and my reactions to them should probably be seen as the beginning of a conversation, not the definitive endpoint. I would encourage both students and faculty at Lehigh to continue to have those conversations with one another -- respectfully.
More broadly, Professor Gunter’s entire presentation aims to suggest that government policies and systemic actions are less important than individual choice. Most historical evidence would say the opposite: the reason poverty rates in the Black community have gone down has much more to do with changes in American law and public policy than changes in personal behavior: the Civil Rights Act, the Voting Rights Act, the Fair Housing Act, Affirmative Action, and so on. If we accept that, it might be easier to see that fixing the problems we still have will surely again demand concerted institutional efforts; we cannot simply turn it over to the “free market” (the real Myth that needs Debunking, if ever there was one). In this YouTube video, Professor Gunter’s approach seems to suggest that the problem isn’t serious, and whatever problems we do have are not “our” concern; people affected by poverty should just fix themselves. As educators -- and as colleagues -- I think we can and must give better answers.

Posted by electrostani at 12:11 PM