[I'm giving the following as a conference talk at the Madison South Asia conference on Friday, 10/12/2018]

I view Sepia Mutiny as a space where second-gen South Asian Americans worked on their identity issues publicly at a moment when a generation of talented artists and performers were on the cusp of emergence into the American mainstream. While the site is now defunct, I would argue that the debates occurring on the site have continued to be live since it went offline, often now in mainstream venues and an evolving set of social media frameworks.

Some of the key themes of Sepia Mutiny writing include:

1) The significance of emergent South Asian American identity in the broader North American context. What does it mean to be ‘brown’ in the U.S. in the early years of the 21st century? What terms do we use to name ourselves? (Do we, for example, use the word 'desi' or not?) How strong or weak are our alliances and affinities as a group (across religious, national, caste, and regional boundaries -- to name just four huge fault-lines)? How do South Asian Americans situate themselves against the white mainstream as well as other minority identities -- other Asian Americans, Arabs and Persian immigrant communities, African Americans, Latinos? What kinds of cultural and artistic products document that emergence and work through some of the key obstacles we’ve faced – including especially 9/11 and the election of Trump in 2016?

2. The many, many ways of being hybrid, mixed, split. South Asian Americans are notably defined by generational and intra-cultural variation, but one thing we all seem to have in common is a kind of internal culture clash. How to connect ‘home’ tastes and values to the versions of ourselves we perform in public? How to position ourselves both with respect to mainstream western cultural icons and South Asian aesthetic worlds -- from Indian classical dance to Bollywood/Bhangra? How much does your identity really mean if, as a second-gen, you don’t speak a South Asian language very well or at all? What is your relationship to ‘home’?

3. The ongoing problem of appropriation as an indirect mode of racism and cultural diminishment. In the mainstream, this could be in the form of western performers appropriating Indian cultural or religious symbolism: a pop star wearing a bindi, or the complex appropriation of Hindu devotional practices in westernized versions of Yoga. It could, of course, also be a matter of accent appropriation -- and here, our own frequent criticisms of western appropriation of bad Indian accents clearly anticipated the kind of critique Hari Kondabolu would later make of Hank Azaria and the creators of the Simpsons in his 2017 documentary The Problem With Apu. I also can't help but think of the "Macaca" controversy of 2006, the many, many examples of stereotyping and typecasting of South Asian Americans as either model minorities or terrorists.

One space where many of those issues continue to be worked out in more maintream contexts is actually in stand-up comedy: the aforementioned Hari Kondabolu has been on my radar, Aziz Ansari (before his career took a strange and unfortunate left turn), Aparna Nancherla, Kumail Nanjiani, and especially Hasan Minhaj. Other figures – Aasif Mandvi and Mindy Kaling have also been on our radar as comedic performers, though they aren’t known primarily for their stand-up. Lately, it’s in the work of comedians like these, perhaps more than in traditional print venues, where South Asian American identity issues are being publicly articulated and debated. Admittedly, stand-up comedy and the television sit-com both have certain formal limitations that are part of the form. It’s often in pushing back against these formal expectations -- those moments in a performance when things actually aren't all that funny -- that comedic performers do the most interesting cultural work with respect to identity. 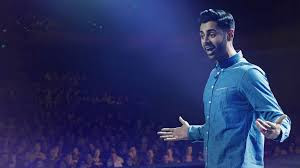 My favorite moment in Hasan Minhaj’s 2017 Netflix special, Homecoming King, comes towards the end, after he’s recounted the painful story of being stood up by his high school sweetheart, Bethany Reed, after her parents decided he was too brown to take to the prom. After she reaches out to him years later, he discovers that she has a boyfriend who is also Indian American; after they meet in person, she reveals to Hasan that she moved in with him against her parents’ wishes. Here’s how Hasan Minhaj reacts:

[1:02.15] And I’m looking at her, and I’m so embarrassed. I’m like, “Dude, what are you doing? Why are you hunting down people from your past like a psycho? [laughter] You’re not Liam Neeson. What is going on?” I realized, “You don’t give a shit about this person.” I care about what she represents. Growing up, we just want that co-sign. To tell them you’re good enough. “Sit here. You’re good enough.” But that’s not the American dream. It’s not reaching out and asking for a co-sign. It’s what every generation did before you. You claim that shit on your own terms. Pizza Hut pizza sliders. Nine in a box for just ten bucks. That’s you. You’re not "Husaan Minaaj." You’re “Hussan Minhaj”. This is new brown America. The dream is for you to take, so take that shit. Stop blaming other people.

This is a jaw-dropping, show-stopping moment. It starts, of course, with self-deprecating humor; From there, Minhaj takes us on a twisty journey that includes hearing his father, in the hospital, expressing disappointment at his failure to forgive someone who hurt him. It ends with him blowing way past Bethany Reed to what is really the bigger conceptual pay-off: that immigrants don’t need to ask for a “co-sign” -- they don’t need the primary approval of white audiences to succeed. Instead of waiting for permission -- waiting for recognition to be given for the performance of an emergent identity, Minhaj suggests “the dream is for you to take.”

Minhaj’s story engages a set of issues South Asian Americans have been struggling with for years – needless to say, these are issues we also struggled with at the group blog Sepia Mutiny a decade ago. In part my current thinking on this topic is informed by Sangay Mishra’s book, Desis Divided: the Political Lives of South Asian Americans. In the political space, Mishra talks about the tension between two strategies for ethnic communities emerging into American political life, the “mainstreaming” strategy and the “minoritizing” strategy. Mainstreaming, as Minhaj would put it, entails waiting for the co-sign, performing for the mainstream and downplaying any trace of cultural difference. For a performer, mainstreaming might start with changing your stage name: Kalpen Modi becomes Kal Penn; Arjun Singh becomes Arj Barker, Piyush becomes Bobby; Nimrata becomes Nikki; Chokalingam becomes Kaling; Sarayu Rao (on the new show I Feel Bad…) becomes Sarayu Blue; Himanshu becomes ‘Heems’ -- and on and on and on. (You'll note that in the clip I showed earlier, Minhaj distances himself from that approach and that history when he decides to insist in his public self-presentation on the correct pronunciation of his name. I'll say more about that in a moment...)

Mainstreaming also definitely meant distinguishing oneself from the unhipness of one’s first generation parents and from recent immigrants, whom second generation South Asian Americans would sometimes deride as “FOBs.” Russell Peters, who I read as part of an earlier generation in South Asian diaspora stand-up comedy, knew how to play this game -- he used a comic Indian accent constantly in his early work. (In many ways what he was doing rhymed with what Margaret Cho was doing with her mother’s accent in the Korean American context.) When they mined their parents’ accents for comedy, performers like Peters and Cho were playing either directly to white audiences’ sense of what would be funny, but also to second-generation audiences who share the performers’ discomfort with visible and audible signs of cultural/linguistic difference. The current generation -- folks like Minhaj and Kondabolu -- are by and large are careful not to do that (though it’s very hard for either of them to get away from this aspect of their humor entirely: some dimension of appealing to a ‘norm’ seems baked into the form of stand-up comedy).

Another mainstreaming gesture -- for writers of fictional narratives -- might entail romantic plots where a desi protagonist’s connection with a non-Indian (usually white) romantic partner is seen as the solution to the impossible demands of family and culture. This is the plot structure we see in Bharati Mukherjee and Chitra Divakaruni novels; this is the plot of Bhaji on the Beach and Bend it Like Beckham. This is why Dr. Mindy Lahiri, for several seasons, only dated white guys (in season 6, she briefly dated an Indian-American man; we’ll have to save that conversation for another day) And yes, this is the plot structure of Kumail Nanjiani’s The Big Sick.

Minoritizing, by contrast, might entail stricter identitarianism with respect to representation: the only person who should play a person of South Asian heritage should be an actor with South Asian heritage. It looks skeptically at plot structures that follow the cross-cultural romance pattern of Bend it Like Beckham or The Big Sick. And it insists that the mainstream accommodates and recognizes our cultural heritage rather than the other way around. If Hasan Minhaj is resistant to a mainstreaming strategy, does it follow that he’s engaged in a minoritizing strategy? That’s not entirely clear to me: it might be more accurate to say that he’s skeptical of both strategies – that he’s aiming to occupy mainstream space without self-erasure or the elimination of signs of difference. He’s speaking to other desis, but also to other immigrants as well as other groups who might connect with his narrative of personal heartbreak and recovery. This might be a third model of emergent identity – a rhetorical register wherein whiteness is not taken as the norm or the default audience. Helpfully, Minhaj himself gives us a name for what this strategy might be: “New Brown America.”

I like this phrase, and want to amplify and expand it. New Brown America might be an idea of the United States where it’s not seen as exceptional when descendants of immigrants rise to prominence, and where successful brown Americans don’t have to deny or disavow their heritage to succeed in public careers. It’s a vision of immigrant cultures and communities where we see allies and shared experiences across a broad number of ethnic lines – so not minoritizing in the old sense. Rather than asking whether South Asians are also Asians, I think in a New Brown America way of thinking we aim for the commonalities between East Asian and South Asian immigrants, between South Asian Americans and Arab Americans, Persians, Latinos, and people of mixed or multiple heritages. New Brown America is also the America I thought we were going to have when Obama was elected – so it might be, two years into Trump, more an aspirational desire than a reality.

Posted by electrostani at 5:02 PM