Was This Photograph Staged? 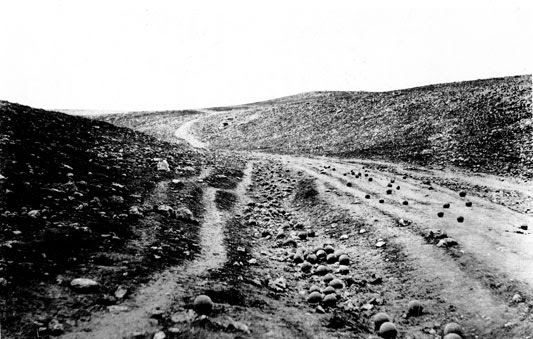 Above is a photo by Roger Fenton, taken in 1855, during the Crimean War. In a blog post at the New York Times, documentary filmmaker Errol Morris researches the history of the photo, focusing on the cannonballs in the middle of the road. Susan Sontag and other historians of photography have argued that the cannonballs were probably intentionally scattered by the photographer to create the illusion of danger, mainly because Fenton also took another photo from the same tripod position the same day -- where the cannonballs are lined up neatly on the side of the road.

Morris does find one historian who suggests a possible alternative to the prevailing theory about the photograph -- perhaps it wasn't staged after all? The alternative theory is that the cannonballs were lined up because they were going to be "harvested" by the soldiers Fenton was traveling with, and recycled against the Russians who shot them in the first place.
Posted by electrostani at 10:39 AM