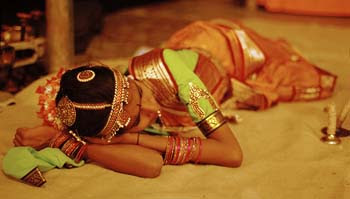 After running at myriad film festivals all over the world, the Telugu film Vanaja is opening as a commercial release in New York this weekend; it will be opening more broadly around the U.S. in the next month.

Vanaja an art film, which is to say, the director, Rajnesh Domalpalli, doesn't come out of the "Tollywood" world of commercial Telugu cinema (he actually has an M.F.A. from Columbia, and the script for this film was submitted as his Master's Thesis). Domalpalli's primary actors are nearly all amateurs -- people he found on the street. Carnatic music and Kuchipudi dance play important, but not overwhelming, roles in the film, and even there, it appears the characters actually spent months training in these rigorous arts.

This is a film about caste and class relations in a village setting, but Domalpalli doesn't take the familiar route seen in many other films about village life (i.e., villagers are exploited, landowners are inherently evil). Here, the rich people, though they do not always behave sympathetically, are as human and complex as Vanaja herself. I don't want to get too bogged down in plot, but suffice it to say that the romance in the film follows a surprising course.

Throughout, Domalpalli pays very close attention to details, including sets and staging, and the result is a film that feels very natural, yet is full of visual pleasures. The colors are rich, though not unrealistically so, and the acting is much better than one would expect from an all-amateur cast and a novice director.

I'm very curious to know how this film might be received in India, in particular in Andhra Pradesh. Unlike the films of, say, Deepa Mehta, who I've now come to feel makes her movies primarily for western audiences, Domalpalli's Vanaja might actually be popular with Desi viewers. (My mother-in-law, who is visiting us from Bombay, liked it.)

One other thing, the set of cymbals on the right side of the photo above is called a Nattuvangam. (The word of the day is Nattuvangam. Say it. Good.) Though I'm a little confused, because this site defines Nattuvangam a little differently; I gather that "Nattuvangam" refers both to the cymbals and to the act of conducting the dance by playing the cymbals?
Posted by electrostani at 8:07 AM

Both sound like Tamil words despite the assertion that Kucchipudi is of Andhra origin. 'Nattu' clearly signifies dance. The 'vanar' ending definitely refers to the person. The 'vaangam' is the thing that the 'vanar' does or provides -- the beat with a pair of brass cymbals, or the 'taalam' with palm beating on thigh. -- the closest Hindustani music equivalent being the 'bol'.

Nattuvaangam is the art of conducting the performance. Artists (in Bharatanatyam anyway) refer to the cymbals as the thaalam. I have not come across them being referred to as nattuvaangam.

The viewership is again limited. Coming from gultland, I think the movie caters to niche audience (metro population). I am not sure if you have ever seen a telugu movie (especially the one in which the caste is intertwined with the storyline), but these movies usually puts caste above all.

It will be just be considered as some random *art movie and there will not be much focus on it.

To say the truth, I never heard of this film till now. So, can't say anything about it.

Nice article by the way!