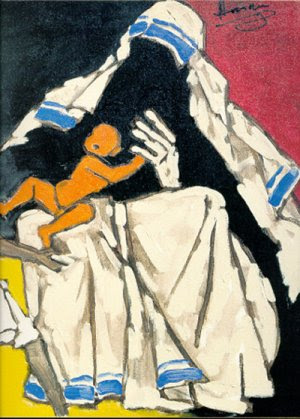 So it seems like the conference I co-organized came off quite nicely today and yesterday.

--One talk dealt with M.F. Husain's "Mother Teresa" series of paintings from the 1970s, which I find to be particularly interesting (see the image above). I like the article by Shyamal Bagchee here, where he does a reading of both Mother Teresa's iconic blue-bordered Sari and the fact that Husain never pictures her face.

--We had a whole panel on secularism-related questions in Bollywood and contemporary Indian art cinema. The most salient films discussed were Gadar, Mr. and Mrs. Iyer, and an old Yash Chopra film I've never seen, called Dharamputra (which you can read about a little here). I tend to think that the era of communalized popular films might be over -- we aren't seeing many films like Gadar these days -- but I couldn't get the panelists to say much along those lines in my question.

--In the same panel on secularism in Indian cinema there was an interesting discussion of the actress Khushbu, a Punjaban who made it big in the Tamil cinema some years ago, becoming a kind of icon of a particular kind of feminine beauty. But just this October she came to be seen as distinctly un-Tamilian traitor after making some controversial comments regarding the double-standard over pre-marital sex in Indian society. No real point; I just find the story interesting.

--One presenter I saw made very good use of the term "Glocalism", which I hadn't really understood earlier: it is the production of the local for a global audience. This presenter was talking about the use of Amritsar in the film Bride and Prejudice, but I think one could also see it in something like Swades. Does anyone out there actually use the word "glocal"? (Is it a necessary term, or is it more "space" theory jargon?)

--Suvir Kaul gave a dymamite keynote, focusing on three texts, The Shadow Lines, a short story by the Hindi writer Swayam Prakash ("Partition"), and a poem by Agha Shahid Ali from The Country Without A Post Office. It was a learned talk, with well-positioned quotes from George Eliot ("If we had a keen vision and feeling of all ordinary human life, it would be like hearing the grass grow and the squirrel's heart beat, and we should die of that roar which lies on the other side of silence."), Tacitus ("They made a desolation and called it peace"), and even Northrop Frye. The Swayam Prakash story Kaul referred to in particular sounded really interesting; it appears one can get a translation of it in a recent anthology called Image and Representation: Stories of Muslim Lives in India, put together by Mushirul Hasan.

I've been reading through Kaul's anthology Postcolonial Studies and Beyond, which has essays that make some really trenchant critiques of the blind spots in postcolonial studies (and even in some instances call the field as a whole in to question), so perhaps there will be more on Kaul's work here soon.

(But I keep promising posts that I'm unable to deliver!)
Posted by electrostani at 11:05 PM

I'm surprised someone used the term "glocal" and made it work - it was very much in vogue in media studies a few years back, particularly when media studies began exploring TV in Asia and so on. For instance, MTV's strategy of going Indian would be referred to as one dimension of "glocalisation" (or Kaun Banega Crorepati to cite another example). It'd be fair to say the term emerged from media studies' intersections with the work of (cultural)geographers mostly working out of the UK.

There was something disturbing about the use of Amritsar in Bride and Prejudice. I watched the movie with a predominantly Indian-American/Indian audience in a movie-hall in Texas and I wasn't the only one flinching at the very forced pallette (look at the colors of India), the kitschy song and dance numbers (with lyrics such as 'Marriage has come to town') or the innumerable rhetorical assertions that des is better than pardes. Amritsar as I know it, is a beautiful complex city. I'll concede to the point of Glocalisation once someone makes a movie on Amritsar that isn't as simplistic and or like a tourist brochure promising a getaway to exotic India.

I certainly expected more nuance from the director of 'Bend it like Beckham'.