Eric Doeringer In the Voice: Bootlegging it in Chelsea 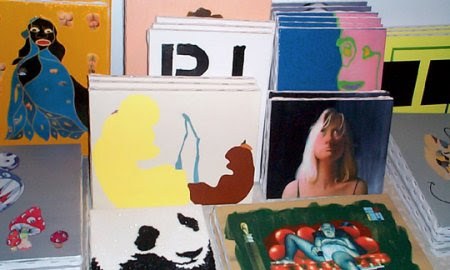 The artist Eric Doeringer is in the Village Voice this week after getting busted by the cops for selling his art without a license in Chelsea, something he'd been doing for four years without incident. Doeringer's version of the event is here.

Doeringer sells bootleg paintings, partly as a way of subverting the commodification of the art-object, and partly because it's just a very good idea: art aficionados might well buy a $100 bootleg version of a Damien Hirst painting of colored dots that they like. The bootlegs invoke the original, but they aren't cheap, mass-produced prints of the paintings they copy. You (the middle-class art consumer) get the "aura" of the original work of art without the price-tag. The only flaw is that your art is an Eric Doeringer copy of a Damien Hirst painting -- but it's only a flaw while Doeringer's name is of lesser value than Hirst's.

One might also add that Doeringer's art flagrantly flouts American Intellectual Property law. What Doeringer does is a little like what Negativland did with U2, or what the Phantom Edit Fan Network did with Jar Jar Binks, and what innumerable hip hop remix artists have been doing with sampling years on their laptops. Except, of course, that Doeringer has been able to get away with it thus far: I gather he hasn't had any trouble with the painters whose art he's bootlegged, though I suspect they would be within their rights to claim that he's infringing on their intellectual property when he sells his bootlegs.

I should also mention that I went to high school with Eric Doeringer. He's obviously going to be famous some day, so you might want to buy one of his bootlegs now.
Posted by electrostani at 9:54 AM

What would any intellectual property law say about a hundred copies of Raja Ravi Varma that flood the market here in India? Varma creations grace calenders, postcards, cushion covers apart from the traditional media like the canvas. Is it okay because he is long dead? And that because he lived before the age of copyright? Or it is because had he been copyright protected the copyright would have long expired?

PS: Varma is only an example.