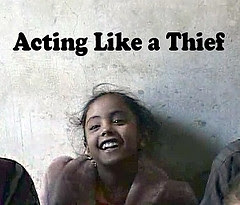 Shashwati and Kerim are working on a documentary on the Chhara community in Ahmedabad, Gujurat. The Chharas were formerly known as a "criminal tribe" (also known as a Denotified Tribe, or DNT), and are still routinely harassed by the police in Gujurat. Most of them make a living by making and selling bootleg liquor (Gujurat is a dry state, so there is always a healthy market for liquor!), though I gather that some still might continue to be involved with petty criminal activities.

More about the Chharas can be found at this story at IndiaTogether.org

Shashwati and Kerim have made a 15 minute segment of the larger documentary (Hooch and Hamlet) available for free via BitTorrent from their website for the film. The focus of this section ("Acting Like a Thief") is the Budhan theater group in Chharanagar, named after a member of the community who was killed in police custody in 1989.

I downloaded and watched the clip, and would definitely recommend it: another glimpse of how the other half (or, to be more precise, the other three-quarters!) lives in India. At a simple level, it's interesting just to hear these people talk. At times they are speaking the language of an aggrieved minority, focusing on the way they are victimized by the police and by the mainstream communities that surround them. But at other moments they acknowledge (and even embrace) their community's "dakku" legacy. Some of the folks interviewed seem morally complicated (particularly the older lady who shows up in the second half of the clip). To me this makes the documentary different from others that have focused on minority or SC/OBC communities in India.

Oh, did I mention? S + K are trying to raise funds to complete the film! Consider donating, or buy something through their Amazon Associates links (I did).
Posted by electrostani at 2:07 PM

Nice to see bittorrent links. This is def the way to go for independent filmmakers to get the word out.
I remember when they tried to make Haryana a dry state. Jats and no liquor? Who was the stoned slacker who came up with that idea?

My understanding was that declaring a location dry was a surefire way of winning the women vote. Apparently alcoholism is a huge problem in rural India.

Ah, that makes more sense. Prohibition in the U.S. was also popular with women voters, I believe.

But it's a bad idea wherever it's tried.

Yes that's right-- the two South Indian actors who made it really really big in politics-- N.T. Rama Rao in Andhra Pradesh and MGR in Tamil Nadu-- both made their states dry at different points, and were wildly popular with women voters (though their work has been undone, and now neither state is dry I believe...on my trip to Hyderabad this summer there were "wine shops"-- selling everything BUT wine-- by the scores)...