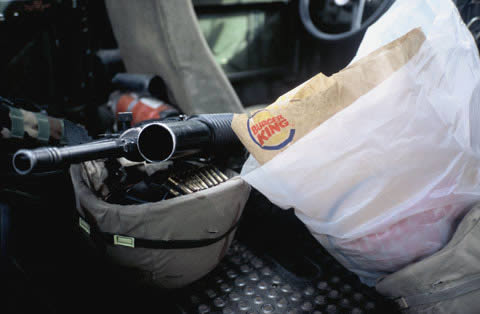 We finally saw the Gunner Palace documentary on DVD over the weekend.

It's every bit as good as Chuck Tryon's review from several months ago suggested. Many readers will probably know what this documentary is about: filmmaker Mike Tucker was unofficially embedded with a U.S. artillery division (known as the "Gunners") in Uday Hussain's bombed-out palace in Baghdad in September and October of 2003.

There are a number of interesting things about the way Gunner Palace is filmed and narrated as well as some mild combat sequences, but for me it is the unfiltered look at what Americans soldiers are doing and feeling when they're at leisure that makes this film worth seeing. It's American pop culture -- Burger King, rap music, and video games -- mixed up with a dangerous, poorly planned military occupation. The guys joke around in the daytime, doing freestyle raps and messing with (Uday's?) electric guitars. But at night they go out on raids and kill -- and are themselves injured and killed.

(Watching this film after the Abu Ghraib photos were released, one is a little less sympathetic to all the clowning around: it seems like that same cocky attitude was in play in the thoughtless humiliation of captives. Perhaps an update from the post-Abu Ghraib moment might have been in order...)

I agree with Chuck that this film is deeply ambivalent about the war/occupation of Iraq. While Gunner Palace is at times quite critical of Donald Rumsfeld, it is so invested in getting the 'grunt's eye view' right that it's not really asking the question of whether these young men and women should be in Iraq to begin with. I tend to think it's a smart approach to take, and I don't really know what the point of making a decisively "anti-war" documentary might be at this point in time, especially given that this will be a long-term occupation no matter who is in the White House: there's no point mimicking Michael Moore.

The directors of the film have a kind of blog/diary up at the film's website, with many stills from the film here.

The military blogger Blackfive talks about the film here.

And A.O. Scott's review positive of Gunner Palace is here (not 100% sure if that link will work; if not, try it via Rotten Tomatoes).
Posted by electrostani at 7:29 AM

Missed this film when it came round here, thanks for the review.

(Lt Neil Prakash, who blogs at Armor Geddon is closing down his blog for a bit, btw)

Yeah, the Abu Ghraib reference is troubling. I'm trying to remember the exact timeline, but the preview screening I saw certainly came after the photos were released, and Tucker drops the reference without really exploring it, which seemed to leave the anti-war crowd wanting more. When I screened clips later at Visible Evidence, the soldiers' actions seemed incredibly thoughtless.

If you get a chance, I'd recommend "Occupation: Dreamland" as an alternative, more critical take that still sees things through the eyes of the soldiers.