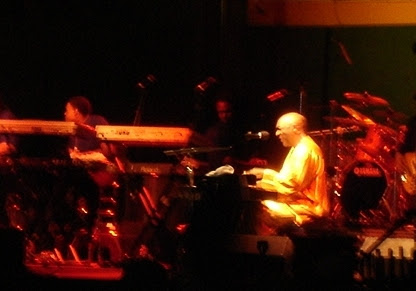 I'm starting to get slightly better at these concert shots from 50 yards away. Still, my man is more blurry than I would like him to be. If this is going to keep happening I either need to find a way to get closer, or get a telephoto lens.

In case you're wondering, he's 62, and he can still sing. I was very happy to have a chance to get to see him. Or not: I have to admit that, as much as the "Theme to Shaft" is a timeless masterpiece, a Double Classic with Cheese on Top, Isaac Hayes isn't really all that exciting. The rest of the songs are too slow, and the melodies too spread out to quite hold together. And no disco-kitsch; for a big free show where the person who is introducing you is the mayor of New Haven, Connecticut, you probably aren't doing Blaxploitation numbers like "Shaft," "Run Fay Run," or (the recent comedic classic from South Park) "Chocolate Salty Balls."

This free Isaac Hayes show was different from the free O'Jays show a few weeks ago. Isaac Hayes drew about 10,000 people, who brought lawn chairs, pizza, and beer. They behaved (last night) like an audience, sitting contentedly, chatting, occasionally applauding. The O'Jays had similar numbers, but people were live; they were standing up and dancing all over the place. The O'Jays crowd came in right before the show, kept circulating the whole time and then dispersed quickly; they behaved like a crowd (in the Elias Canetti sense).

The difference in the crowd's attitude probably has more than a little to do with the music, especially since Isaac Hayes and the O'Jays appeal to roughly the same demographic. If Isaac Hayes's staple is sleepy elegies like "Walk on by," the O'Jays, old as they are, still have a lot of danceable tunes ("Back Stabbers," "I"m a Girl Watcher," "Love Rollercoaster," and of course "Love Train").

(Side note: The O'Jays deserve an apology from Angie Stone for the way she ruined "Back Stabbers" with her song "Wish I Didn't Miss You"; I love you, Angie, but the beat to "Back Stabbers" is sacred. Same goes for Biggie Smalls' misuse of the Isley Brothers' "Between the Sheets." Everyone goes on and on about Biggie, but without the Isley Brothers behind "I love it when they call me Big Poppa," I don't think he would be standing where he is.)

Final thought: The sedateness of the "audience" at Isaac Hayes last night didn't stop people from doing crazy things and getting arrested -- after all, it is New Haven. I saw a bunch of guys getting dragged to the Paddy-wagon, and I saw a large group of teenage girls get into a pretty heavy fight at the corner of Chapel St. and Church St. There is a familiar misogynist gag about women fighting ("cat fight"), but when you actually see people fight like they mean it, there's no prurient interest. It's sad, and it's scary.


Posted by electrostani at 3:22 PM

Ah! I am with you on Angie Stone. But isn't "Big Poppa" about how Biggie interacts with/inverts our memory of the song? Makes it "hardcore"? "Fuck a dollar and a dream, still tote straps with an infra red beam", over "Between the Sheets"? God Damn. The 70's song stands for a lost dream, a smooth, sultry, pre-crack black life that has gone missing in the bleak and gully Nineties. Remember back in the days....nah, but fuck that! Things Done Changed.

It's dialectical, and deeply in its historical moment. Modernist. Unlike Angie Stone! And of course it was in the context of its B-side: the lyric fathom/streets anthem "Who Shot Ya?" Its flipside and jet black alter ego.