Stranded on a tropical island: Boleros, Reggaeton, and lazing around 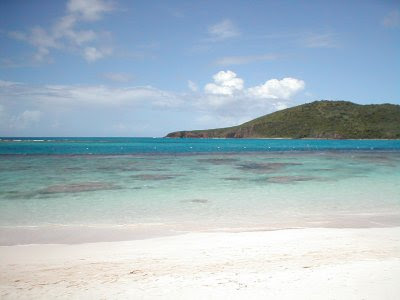 It's nice to know a little Spanish when you're stranded in a place like Culebra, as we were on Sunday. Spanish helped here and there; it might have made things even more interesting if we'd known a bit more.

We might have done a couple of other things with that lost evening. But the four hours waiting by the water for the second ferry back to Puerto Rico (after the first was sold out), and the surprise hotel in Fajardo, while not on the agenda, were serendipitous pleasures.

We got a ride from a retired postal worker and Vietnam war veteran who now raises roosters for cock-fights. Without prompting, he started singing along to a CD of boleros in a borrowed car. Entertaining, except for the part where the spirit of Lament for the Old Days of Romance caused him to nearly drive off the road. We also chatted with the proprietor of a small roadside stand ('comidas criollas'). Both had an almost identical litany of complaints: 'lazy people' on the island (they meant Puerto Ricans, not tourists) and the sad state of Puerto Rican youth. They seemed to hate the island life (congestion, crime), Puerto Rican rap (Reggaeton), and how expensive everything's gotten. It didn't seem too bad to me -- but then I was on vacation.

Ok, now back to work.

Posted by electrostani at 8:13 AM