Rumors have it (ok, Wonkette) that Jack Ryan is going to have to withdraw his bid for the US Senate. There was a press conference scheduled for tonight, but it was cancelled; perhaps Ryan's withdrawal will come tomorrow (I certainly hope so). Dennis Hastert has, at any rate, pulled his support for Ryan.

So I guess they're not wholly immune to hypocrisy.

Interesting tidbit: a turbaned Sikh ran against Ryan in the Republican primaries. His name is Chiranjeev Kathuria; he is a high-tech millionaire.

If Ryan is out, don't hold your breath for Kathuria. I would guess they would go with Steve Rauschenberger (who has experience in the Illinois State Assembly) or Judy Baar Topinka before Kathuria... That is what the Sun-Times is saying, at any rate.

Kathuria's campaign did not generate much enthusiasm, even amongst U.S. Sikhs. In the debates held in Chicago back in February (see links in the Sun-Times here), Kathuria was questioned about whether he embellished his resume (he says he didn't), whether he really dated Selma Hayek (he did not), and how he might motivate the apathetic voters of Illinois when he himself has never registered to vote before. Nothing doing. Here, ethnic pride has to take a back seat to reality: Kathuria's campaign was essentially just a publicity stunt. 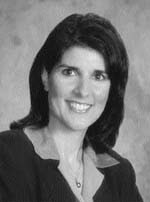 In other news, Nikki Randhawa-Haley won her runoff election to the state legislature in South Carolina. Since there are no democrats running, she wins the seat. It is an event that's been widely covered in the Indian press but ignored here in the U.S. It is certainly much smaller news than the Illinois Senate or the Louisiana Governorship (i.e., Bobby Jindal), but after all, it is South Carolina.

[see my earlier post on this here]
Posted by electrostani at 7:57 PM

Go Barack Obama! Hopefully this will help seal a victory for him.

Yes, on Kos they are saying that Obama looks like a sure shot. He's raised lots of money (nearly equal to the Repubs.), and he seems like a strong, likeable candidate. This is the same seat that Carol Mosely-Braun won some years ago -- so an African American definitely has a shot. Of couse, it's not over yet.

As for where the desi democrats are. It seems to me there are lots of highly politically active 2nd gen Indians who are currently under 25, but very few who are older (i.e., who are currently in a position to run for anything).

I think we will begin to see a more balanced spread of candidates from Asian backgrounds in 5-10 years.