Yuva Review: the flow of ideas in movement 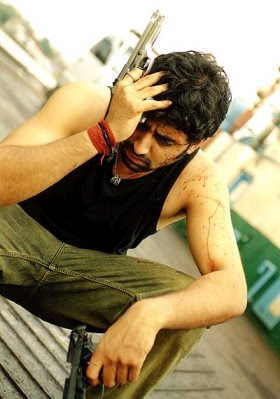 Alas, I have been feeding myself too much fluffy entertainment: when I see the real thing, my readers may not believe my superlatives. Now my review of the formula film Main Hoon Na, seems instantly irrelevant as I consider the visual imprint of Mani Ratnam, a modernist and genuine auteur.

So I'll spare you the superlatives, and simply say that Yuva is a really good film by one of the only Indian directors who has both a signature visual touch and a commitment to representing the political realities in India. Yuva ('Youth') doesn't have the stunning locations or the rousing choreography of Ratnam's earlier Dil Se. But it has a concrete commitment to the urban landscape of Calcutta/Kolkatta and a fixed social, cultural, and material milieu, which Dil Se didn't have.

Perhaps part of the confusion of Ratnam's Dil Se was that it was about a secessionist movement that was never really named, and whose moral value remained abstract: does this unnamed ethnic group in the eastern Himalayas have a legitimate claim against the government of India? The sense of ideological abstraction was heightened by the film's wandering all over India in pursuit of dramatic, visually stunning locations. The politics of Dil Se were thus utterly confused, and overwhelmed by the beauty of the cinematography; the ideological interest was more or less aestheticized. Watching the film was a little like reading Walter Benjamin -- exhilarating, but somehow dangerous.

In contrast to Dil Se, Yuva gives a visceral and unsentimental image of how life looks and feels in Indian society for the urban lower classes. Also, the camera almost never leaves Calcutta, even in most of the songs ("Anjani" is actually shot at a beach in Channai). Finally, and most importantly, the film directly delves into a highly current moral crisis: Ratnam pits amoral individualism, represented by the new Indian entrepeneurship and by the possibility of achieving wealth through emigration, against the moral idealism of collective action. One might expect a 'responsible' film-maker to pull the audience towards moral idealism, and there is somewhat of a tilt against emigration for personal benefit. But Ratnam strongly inhabits both viewpoints, and brings them into collision. The parallel structure of the plot challenges the audience to identify with both ethical realities, which is somewhat emotionally confusing at times: is Abhishek Bachchan's character a villainous villain, or a heroic villain?

Music Yuva's music is by A.R. Rahman, which means that the songs are damn good. Rahman seems to be taking a hint from the Shankar-Ehsaan-Loy turn to catchy house music, and has added a substantial contribution on this soundtrack, with the deliriously catchy 'Fanaa' and the drum-n-bass inflected 'Dol Dol'. It's right that he's going in this direction, mainly because crazy-fast music is only appropriate in a film called "Youth." Also, it gives someone like me more cool songs to play at Indian dance parties.

I haven't seen all the Tamil films Ratnam has done that haven't been dubbed into Hindi (Roja and Bombay were both dubbed), so I can't comment on whether there is a trend in his work as a whole. However, I was lucky enough to see Peck on the Cheek at a film festival in Philadelphia last year (see my review of it here). I do feel that Yuva is a step down in visual-aural intensity from Peck on the Cheek, which was bursting with a child's glee at being alive -- tempered by the confusion of a girl whose mother has abandoned her to fight for the LTTE, the Tamil separatist movement in Sri Lanka. So I'm curious to see the Tamil version of Yuva, Ayutha Ezhuthu, which has been released at the same time. The two films were shot together, though they have different actors.

Yuva has an element of pure cinema about it. Ratnam has an eye for the lyricism of movement, which encompasses everything from jail fights in the rain to the spatter of waves at the beach. Indeed, sometimes I found myself watching what Ratnam was doing with the water instead of Kareena Kapoor... He can create magic in an extended romantic sequence entirely in a tram, followed shortly by a nightmarish fist-fight on a bridge, in oncoming traffic.

One sees Mani Ratnam films to fulfill three desires, in descending order: 1) sheer visual boldness, 2) a constant flow of ideas encapsulated in movement, and 3) the framing of current ideological problems, which may be unresolvable. Yuva, like Dil Se, strongly fulfills the first two desires. Ratnam remains a little schizophrenic on point 3, but here he has given us much more to chew on.
Posted by electrostani at 9:47 AM