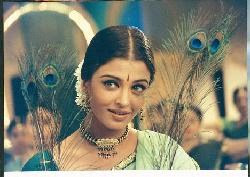 We finally saw the Tamil film Kandukondein Kandukondein. The DVD, which we picked up at Raaga in Iselin, New Jersey, advertises itself as the "first Tamil DVD in DTS Sound." It's a version of Sense and Sensibility, and as such it has a nicely structured plot, though Austen readers will be well-equipped to predict the surprises. However, far and away the best thing about this film is A.R. Rahman's music; the songs are among the most traditional and prettiest-sounding songs he's ever done.

It's a little strange to watch this film as a non-Tamil speaker. For one thing, the subtitles come very fast; I sometimes found myself so busy reading that I was unable to actually watch the film. This is not usually a problem for me: either the subtitles cut away too fast, or the dialogue in this film is particularly snappy.

Secondly, this is a film where the big stars, Aishwariya Rai and Tabu, are themselves non-Tamil speakers. As a result, while their lips move to approximate Tamil, their voices are overdubbed. So if I were to say, "I really liked Aishwariya's performance in the film," for instance, I would be describing her performance as essentially an actress in a silent film: her voice is being used neither in the songs nor in the dialogue! (I realize this is a fairly common phenomenon, a consequence of the porous boundary between Bollywood and Mollywood (Madras), but it still strikes me as odd.)

I generally enjoyed the new Hindi film Murder, which stars a new hot-property in Bollywood, Mallika Sherawat (see this interview; and I thought this review was funny). The film is an Indian remake of Adrian Lyne's arty Unfaithful (IMDB); actually it is the second Indian remake of Lyne's film to come out this year (the first was Hawas). Like most Indian remakes of American films, it jazzes up the storyline a bit, and adds a few songs; watching both the U.S. and the Hindi versions of the film might be a good way to see the differences and commonalities in film language. American directors like unspoken tensions and unvoiced emotions; Indian films leave nothing unresolved or unspoken. (Another example of the genre is Raaz (secret), which remade What Lies Beneath (IMDB), often ripping the U.S. film shot for shot)

[Side thought: in an increasingly global market, how long will it be before American movie studios start sueing Bollywood for these kinds of rip-offs? Last year, Dr. Dre was sued by Saregama, an Indian record label, for sampling "Thora Resham Lagta Hai"... how long before it starts to go the other way around?]

Of course, most people watching Murder, which is currently a big hit in India, will not have seen the American film it is based on. So what is new in this film by Bollywood standards is the explicitness of the sex scenes (yes, with plenty of kissing, and more than kissing; lots of skin, but no explicit nudity). They are definitely on untested ground here...
Posted by electrostani at 10:31 AM

RE: The increased sexual explicitness of Bollywood films. I wonder how you feel about that.

It seems there are two sides of this trend to me. On the positive, it's likely that there will be a more explicit honesty about sexuality in Indian films. On the negative, the relaxed standards in Bollywood seem to be symptomatic of globalization (read Americanization here).

The restrictions on explicit sexuality have fostered masterful creativity in the use of metaphorical sexual imagery in Bollywood. Relaxing the standards means that this artfulness will likely decay. And, given your observation that in other instances Indian films leave little else to the imagination - that the dialogue spells it out clearly - I wonder what this means for the future of Bollywood as a unique style.

Will Bollywood look more like Hollywood? I suppose the dancing wil remain. And, that's something distinct to Bollywood. But, I still wonder about it.

btw: I'm not an expert Bollywood filmgoer. I've seen fewer than a dozen films but they range from Salaam Bombay to Rohit to Lagaan.