A Public (Government) School in Bihar

From a recent New York Times article on India's public education system, is a public school in Lahtora, which I believe is in the state of Bihar: 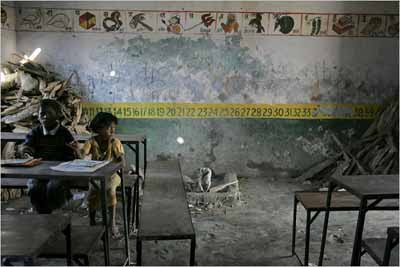 Ouch. (Click on the photo to see the original, larger version at the Times.)

Interestingly, the article (again by Somini Sengupta), shows that the problems in the system aren't necessarily simply created by a lack of funds. Quite a bit of money is being spent by the central and state governments to improve government schools -- this particular village had been allotted $15,000 to build a new school. The problem is that the funds often remain unspent, sometimes because of the famously thick and impenetrable Indian government bureaucracy, and sometimes simply because of corruption and nepotism at the local level.

Sengupta does sound some positive notes along the way. The sheer scale of the effort to improve the schools is mind-boggling:

India has lately begun investing in education. Public spending on schools has steadily increased over the last few years, and the government now proposes to triple its financial commitment over the next five years. At present, education spending is about 4 percent of the gross domestic product. Every village with more than 1,000 residents has a primary school. There is money for free lunch every day.

Even in a state like Bihar, which had an estimated population of 83 million in 2001 and where schools are in particularly bad shape, the scale of the effort is staggering. In the last year or so, 100,000 new teachers have been hired. Unemployed villagers are paid to recruit children who have never been to school. A village education committee has been created, in theory to keep the school and its principal accountable to the community. And buckets of money have been thrown at education, to buy swings and benches, to paint classrooms, even to put up fences around the campus to keep children from running away. (link)

It doesn't always help. The free lunch program in this village, for instance, doesn't work because the principal says the rice he's been sent (lying in stacks in the classroom) isn't "officially reflected in his books." But the recently released Pratham study finds that free lunch is working in 90% of schools, which is pretty good -- again if you consider the scale of the project.

Incidentally, some Indian newspapers have also covered the findings of this year's Pratham survey, in somewhat rosier terms -- and, needless to say, no reporters or photographers going out to see actual village schools. The Economic Times, for instance, is impressed that teacher attendance has improved from 38% in 2005, to 53% in 2007. Improvement is great, but it's still hard to imagine children learning very much when their teachers only show up every other day!

Finally, the full 2007 Pratham Survey is here (PDF); I haven't had a chance to look at it yet. Overall, Pratham looks like an important NGO; I'm considering donating something to them to support their efforts.
Posted by electrostani at 10:50 AM

Hi Deep,
Pratham is a very good NGO and is doing very impressive work(I know this from my previous association with Asha at a certain university where we overlapped). I dont know if ASHA is still funding Pratham projects, but if it is you could probably donate to specific projects through them.

Isnt your own comments a bit contradictory.
To start with you say that money is not a problem in Indian system and you end by saying i will donate money to the NGO

I would suggest, if you are serious about doing something, given your own educational experience, how about donating some of your time in improving the system.

Dare i say, you might find this too expensive ?

First, actually there's no contradiction there at all. When I mentioned that there are funds available, I was talking about the GOI, which is spending quite a bit of money on education.

Actually, I am thinking of volunteering in India for some months in the near future -- possibly this summer. So your insinuation is incorrect.

Apologies for my impulsive comment earlier. Reason i was anonymous is i dont have a registered name... this time i will identify myself.

Hat-tip to you that you will be volunteering your time in India. This is heart-warming.

Secondly, i myself am based out of London. I follow Indian social sector quite actively. However, i am in the anti donation camp.

Thirdly, We all know that there is lots of money sloshing around in India for all sectors. Whether it is GOI or NGO have access to money. For eg., i would guess that if you call Pratham, they would quite likely say they have enough money. If this is indeed the case,you might want to examine whose need the donation satisfies !!

In my mind, it looks like we dont have enough professional attention paid to any of our basic sectors i.e., Heath, Education and other infrastructure necesseties. All of us (myself included) need to work to find a good scaleable model which impacts at least one district (if not a state)

I am hoping to relocate to India in 2008 and hopefully i will find the right role too.

Anyways, your blog needs deeper consideration. I would still maintain that the views you have expressed are not fully thoughtout.