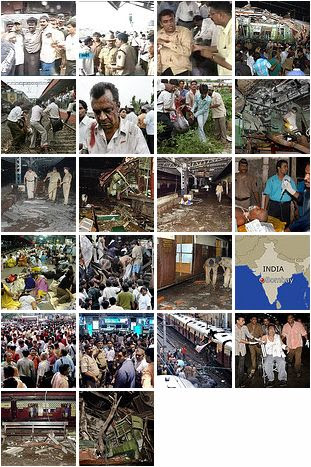 Hi Deep,
I hope everyone you know is ok.
regards,
vk.

Yes, VK, we've heard from everyone. S.'s family are all all right. (I also have a cousin in Bombay right now, who is fine.)

I seem to recall that most of your family is in the south, yes? I hope you've heard from everyone who may have been nearby. BTW, I hope SS (your former roommate, from New Haven) and his family are ok.

The local train was stopped at Parel. My cousin got off the train - completely helpless in a city she had reached only a couple of days ago to pusue a course in communication. The roads were jammed, the mobiles not working. She managed to reach a distant relative in Bandra on the phone somehow. She was advised to walk as nothing else was possible. She walked from Parel to Dadar - a walk that took her 4 hours. The city was in complete disarray. But no one, she tells, said a thing that would vitiate the city's record of communal harmony.

But the question remains - how does one deal with the rodents that keep emerging from the dark caves and darker holes clutching state sponsored deadly plastic in their claws to maim, to kill, to destroy humankind's faith in its own creative and collective joy.

A correction: By state-sponsored, I did not mean the Indian state. The trigger of such dastardly acts as we all know is elsewhere.

Uma @ Indian Writing has a brief yet very touching writeup. Metroblogging Mumbai too.

Glad your family is OK.

Deep,
SS is fine and so are his folks. Mine are, as you mentioned, not in Mumbai. To my knowledge, others of our mutual acquaintance are ok as well. Thanks for asking.

Panini,
The truth is that there is not much that one can do. Also, even if something is done, most of this will not be made public. I only hope the average yahoos in Mumbai and elsewhere don't start looking for targets to take their anger out on. I don't really expect this to happen, but there is always such a possibility. The response from Mumbai has been very mature and sensible till now.

Here's my poem in Punjabi

The Pakistani Foreign Minister, Mr Kasuri, while commiserating with India on the serial bomb blasts of 11/7, have gone on to link the events to the Kashmir issue. Now what is one to make of such inhuman and macabre expressions of 'solidarity'?

The Pakistani Foreign Minister, Mr Kasuri, while commiserating with India on the serial bomb blasts of 11/7, has gone on to link the events to the Kashmir issue. Now what is one to make of such inhuman and macabre expressions of 'solidarity'?

The Pakistani authorities said that Kasuri was misquoted by Reuters in linking the blasts with Kashmir issue.

Now Pakistan tried to clarify to the international media that everytime a blast happens in India and fingers are pointed at Pakistan. Pakistan must be thankful that it's a neighbour to India and not Israel, because Israel doesn't point a finger, it points and gun and also presses the trigger!

Instead of doing some house cleaning they are more interested in defending the terrorist camps. So if this was not done by PoK based terrorists(which is not going to be the case), aren't they going to shut them down?