In the interest of not being too serious, let's talk Oscar.

Did you notice that all five films begin with letters at or before the letter 'M'? I've sometimes felt that films with letters closer to the beginning of the alphabet do slightly better, because they sit closer to the top of movie listings and such. Interestingly, every Best Picture Winner since the year 2000 has also started at or before 'M': Million Dollar Baby, Gladiator, A Beautiful Mind, Lord of the Rings. (In the 1990s, the ratio of A-M and N-Z is 1 to 1)

I'm not really sure who's going to win -- I haven't seen Crash or Munich. But I saw the other three, and I can't see the award going to Good Night, and Good Luck, because it's such a small film (Oscar likes big and sweepy). And Capote is too cold and amoral (Oscar likes a moral, and Capote questions about the viability of the death penalty is arguable). Because I read so many mixed reviews of Crash, my money's on Munich or Brokeback Mountain. While most people are predicting Brokeback Mountain because of all the hype this spring, it's always dangerous to bet against Stephen Spielberg...

It's possible that Best Picture will go to Brokeback Mountain, while the Best Director award will go to Spielberg and Munich.

On Documentaries, I did recently watch Murderball (the film about quadroplegic rugby players), which is a long-shot against March of the Penguins, but a damn good documentary nonetheless. I'm also trying to figure out how Werner Herzog's Grizzly Man wasn't nominated; that is a really brilliant and philosophically challenging film.

I have a gut feeling that Capote will win Best Adapted Screenplay, because it's a movie about a writer on the verge of greatness, and films about writers writing tend to ring the "well-written" bell, if you see what I mean. Capote should also win for Phillip Seymour Hoffmann in the Best Actor. (Best Actress is harder to read, isn't it? Reese Witherspoon was good in Walk the Line, but it was a pretty conventional role. Hard to compare her to more radical roles like Judi Dench in Mrs. Henderson Presents or Felicity Huffman in Transamerica)

I haven't seen any of the Foreign Films this year, though I would encourage the committee in India who chooses which films to select to send to the Academy for pre-nomination to look carefully at the films on this list. Note that none of them look anything like Paheli! I get the feeling that the government committee is a bit cut off from the rest of the world. Something like 15 Park Avenue might have had more of a chance; mostly the official Indian submissions tend to be pretty ridiculous choices. 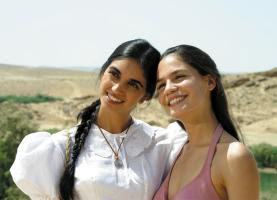 Now to be just a little more serious.

In a couple of weeks, I'm going to be on a panel at Lehigh talking about a recent Israeli film called Turn Left at the End of the World (also see IMDB).

The film is about the interaction between Indian and Moroccan immigrants to Israel in the 1960s. Beginning as early as 1949, Indian Jews were invited to 'return' to Israel, and the immigrants placed by the Israeli government in rural settlements, often based on where they came from in India. Jews from the Bene Israel community in Bombay tended to end up in a desert town called Beersheva (where they struggled), while Cochin Jews tended to go to more agriculturally-friendly places in other parts of the country (where they prospered). There are now about 60,000 Bene Israel Indians in Beersheva, with less than 5000 remaining in Bombay.

I got to watch a preview copy of Turn Left at the End of the World last night, and it is actually a lot of fun; it stars a well-known Indian actor named Parmeet Sethi, as well as some actual Indian Israelis (Liraz Charchi, pictured above, is particularly impressive as Sarah Talkar). Judging from some articles I've been reading, the film's portrayal of the integration of the Bene Israel Jews in Beersheva in the later 1960s is probably a little too upbeat. In real life, the Indian Jewish communities tended to remain somewhat segregated from the mainstream of Israeli society, and the Bene Israel community in particular had to struggle to get official recognition as proper Jews. But that's a quibble; if you see this film playing anywhere, definitely go see it.

Does anyone have any recommendations for further reading on Indian Jews, either in India or Israel?

(Oh, and what are your Oscar picks and why?)
Posted by electrostani at 6:47 PM

It's dangerous to bet against Spielberg? Only one of his films has won the Oscar.

But I congratulate you for being the first Oscar pundit to predict Munich is going to win anything. It's pretty much accepted as a done deal that it will go home empty-handed. Especially since it belly-flopped at the box office (the only nominated film not to turn a profit), and it hasn't exactly been getting the greatest of reviews. It was a miracle it was nominated for the top awards at all, and that's as far as it will go.

Reese's award is a done deal, too. Notice she's been winning all those SAGs, Globes, BAFTAs, etc.? You're dead on about Hoffman, though.

You're using a writer's logic to determine why Capote will win Screenplay. But we must go by Oscar prognosticating logic, and that says that Brokeback Mountain's screenplay will win, and anything else winning will be a result of a rip in the space-time continuum. Writers may be flattered by films about other writers. But the entire Academy votes for this category, not just the writers. Again, Brokeback has been winning all the screenplay honors up to now. (Globe, BAFTA, Writer's Guild award, critic's awards, etc.)

You wanna win that Oscar office pool, don't you?

Especially since it belly-flopped at the box office (the only nominated film not to turn a profit), and it hasn't exactly been getting the greatest of reviews.

You're right about the importance of the box office -- Oscar likes profits too.

But I believe the reviews are pretty good -- thumbs up from the New York Times, Houston Chronicle, USA Today, Boston Globe, and Cnn.com.

Strictly from statistics, one might pick George Clooney for his brave, unconventional little movie about the due process of law. Maybe another possible on Best Director...

In short, I really don't think Brokeback Mountain has it locked up as tight as everyone says. Maybe on Best Picture, but not the other awards.

A great book about Indian Jews in India, Israel and America is "Burnt Bread and Chutney" by Carmit Delman.

Hi Amardeep,
I've been curious about the fates of Indian Jews who migrated to Israel for quite some time. I have been unable to find too many articles about them, so if you do find more, could you post them up on your blog?

Another book is "Who Are the Jews of India?" by Nathan Katz (a review will be up at my blog in just a few days). It is a pretty exahaustive history of Indian Jews. A charming anecdotal account of growing up Jewish in India is "Hooghly Tales" by Sally Solomon.

Esther David has written two fairly interesting novels about her (Jewish) family in India, and both of them address the bigger questions about that community in India.

Check 'em out, The Walled City and The Book of Esther.

That Burnt Bread and Chutney book sounds really interesting. I'd like to hear more. (the movie sounds even better, but there's no chance of getting it here)

Thanks for the information about the books, I'll check them out.

Hi Amardeep,
I take it you know of Jael Silliman's work? She published Jewish Portraits, Indian Frames: Women's Narratives from a Diaspora of Hope (Brandeis University Press, 2002) about Calcutta's Jewish community. Thanks again for great posts.