Who To Root For? 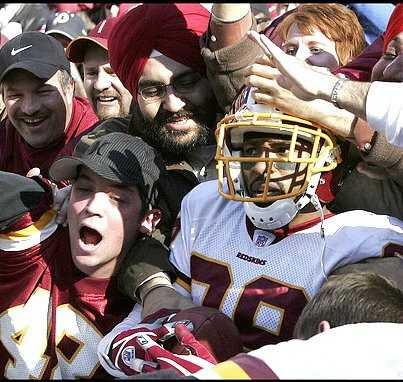 I grew up in Washington, DC, but now I live in Philadelphia. Who to root for? I don't know; it's hard to leave behind one's regional pride (Washington), and this year it isn't really very rewarding to root for the Eagles, who had a major meltdown about two months ago. Still, the pressure one feels from constant media bombardment in Philadelphia is hard to withstand: radio, television, and newspapers cover football nonstop, and it's hard to ignore that steady temptation to 'convert'. (Who says America is a secular country?)

So who knows who to root for? And can anyone explain how Sourav Ganguly is back on the Indian Cricket team again? People are saying it has more to do with politics (i.e., Somnath Chatterjee) than Ganguly's likely contribution to the team. Aren't we glad that American politicians generally stay out of sports controversies? (Oh, wait!)

Look at the above image again: notice the Sikh fan in the middle of the picture: we know who he's rooting for, at least, with a burgundy pagri to match the Redskins' jerseys...

It's notable, because the image above is blown up large on the front page of today's Washington Post -- not something you see every day. The player in the picture, incidentally, is Santana Moss.
Posted by electrostani at 2:45 PM

Is that your 15 minutes of fame?

It isn't me! But anyway, Merry XMas and Happy NY to you too.

Root for the Skins man...they have the best chance! Too bad for Philly...2 many distractions and injuries.