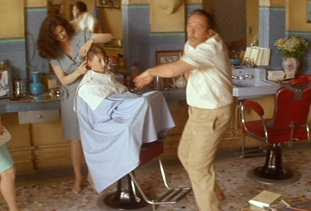 Incidentally, the director of the film, Sarah MacDonald, has an interesting connection to India.
Posted by electrostani at 10:18 AM

Good luck with the house. How exciting.

I *just* finished my grading/evalutations for the semester. So glad it's over!

re: Jonathan Strange and Mr. Norrell. I was *so* excited for this book, but just couldn't get past page 80. What are you enjoying so much about the book? I am curious.

It definitely picks up a lot after Jonatah Strange enters the story -- he's everything Mr. Norrell isn't.

A lot of what Clarke is doing in the early part of the book is satirizing the learned quasi-scientific society of the late 18th century -- where science was a "gentlemanly" pursuit rather than a full-on profession. Some of the humor, I suspect, might be a little obscure to folks who don't noramlly deal with debates in British literary history about Augustan poetry, the Ancients and the Moderns, the Romantics, Grub Street, and so on. Alongside the parody of old science, I think Clarke's using "magic" to comment on the changing value of book-learning at the beginning of the modern era... [More on this soon]

Clarke gets more seriously into the actual magic stuff with Strange... And when she gets going with it, she really gets going. Some of the stuff about the Raven King later in the book is pretty marvelous.

Anyway, expect a long post from me on this book soon ... maybe Friday? There I'll try and explain why I'm liking it so much.

Look forward to the long post on Jonathan Strange & Mr Norrell...yes, the book really does pick up after Strange makes his appearance, and I loved the Raven King portions too

i'm delurking here...look forward to a long review of Jonathan Strange and Mr Norrell. it takes time to pick up but isn't it worth it!

love your blog and read it religiously.

it breaks my heart to hear "the hairdresser's husband" described as a trifle *mock sob* but yes jean rochefort's dancing to amr diab and other arabic music, and just jean rochefort himself is what makes this worth watching.

have you already seen "the double life of veronique"? also quite a few films with daniel auteuil (and i'm not just saying that 'cause i'm crazy 'bout him) are recommended, like "un coeur en hiver", "girl on the bridge", and "queen margot". there are others but those are all i recall at the moment.

good luck with house buying. having been on househunts with friends, i can attest to it being a harrowing experience sometimes. hope it's much easier for you. :)