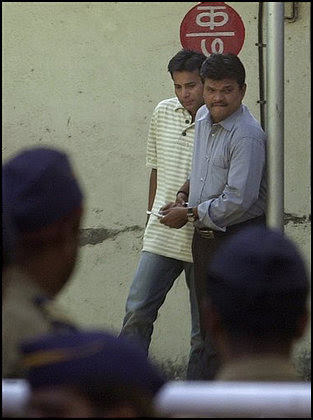 Abu Salem, the guy in the yellow shirt above, was recently turned over to the custody of Indian authorities. He's been one of India's most wanted criminals, ever since the early 1990s, when he was involved in a terrorist attack that killed around 250 people, and injured thousands. He remained active in Bombay throughout the 1990s, and became particularly notorious for his widespread extortion and assasination of Bollywood personalities. Since 2002 he's been in jail in Portugal, while India has pursued his extradition.

There's something particularly pathological about targeting movie stars for extortion and assasination. The extortion part of it is fairly predictable -- I suspect anyone who's either rich or glamorous poses an obvious target. But what's unique about Abu Salem is how ready he was to murder people in the prime of their creative success. (Fortunately, two of his most prominent targets, Rakesh Roshan and Rajiv Rai, survived his attacks. Gulshan Kumar was not so lucky. See Rediff's charge-sheet here)

It reminds me a little of the Oliver Stone film Natural Born Killers, which plays with the cult of the serial killer, implying that in the U.S., flamboyant murderers become impromptu movie stars through the media storm they produce.

Abu Salem was in some sense the opposite -- someone who seems to have been drawn to glamorous and successful people, and who had the means and the will (perhaps tied to a psychotic personality) to destroy them.

It's strange; he has such baby-boy looks. In another life he might have been a movie star himself.
Posted by electrostani at 10:57 AM

Natural Born Killers didn't so much as imply the celebrity status of serial killers, it reveled in them. Tarantino wrote the script based on Bonnie and Clyde, and he lifted most of the plot from Terence Malick's Badlands.
The reason Bonnie and Clyde became famous was because of the pictures they left behind in one of their hideouts, which were printed all over the nation, showing just a bunch of kids with guns out for fun.

Deep,
He apparently had plastic surgery in Portugal. Hence (prob'ly) his babyface.

He looks more like a software professional. Maybe vk is right, that he had some sort of plastic surgery done because he looks quite different from the caricatures of him they used to flash in media.

hmm.. with his baby face he managed to kill so many people..However I am just curious on what our Govt. would do now.. What would be the trial of the outcome assuming he does not escape before then..

He will continue to run his empire from jail(airconditioned five star one at that) after bribing all and sundry.