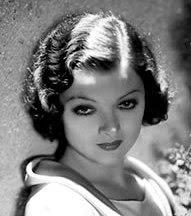 While flipping channels this weekend, I came across a 1939 film called The Rains Came, starring Myrna Loy as the wife of a British lord in colonial India. It was on Fox Classic Movies, which is a clone of AMC: you don't have to pay extra for it, and most of the time it's quite obvious why.

But this film is one I would have gladly paid to see. The Rains Came is based on a 1937 novel of the same name by Louis Bromfield. It is a romance melodrama, with Myrna Loy in all her eyelid-fluttering glory. Think two solid hours of perfect make-up and hair, amazing outfits, anguished sobs, and sultry glares. For some readers, I hope that sounds like heaven. (Others, I'm sure, will run screaming from the room! But hopefully even melodrama-averse readers might still find something of interest in this film...)

The Rains Came is set during the monsoon in a princely territory called "Ranchipur," which sounds a little like "Ranch-uh-poor" the way the actors pronounce it. If we take the name a little too literally -- Ranch 'o the Poor -- The Rains Came is an eastern western, except full of poor, skinny Eastern Indians instead of fierce, feather-hatted and ululating American ones. (Borrowing a joke there from Salman Rushdie)

Anyway, the monsoon was apparently not exotic enough: a huge earthquake also occurs, freakishly relevant to recent events. And even that's not enough; the quake leads the local dam to crack, flooding the town of Ranchipur, and that leads to the rapid spread of disease. Myrna Loy, whose romance with the Hindu doctor Major Rana Safti seems doomed, leaves off her frivolous, pampered lifestyle and dedicates herself to taking care of the sick natives. She soon finds herself sick with whatever it is they have... and, oh, you know the rest.

The film, IMDB informs us, was decently successful, though it was heavily overshadowed by Gone With The Wind, which was released the same year, instantly becoming the benchmark for Big Hollywood Total Disaster melodrama. (The Rains Came was still nominated for six Academy Awards, and won for best special effects -- the flood scene is pretty spectacular).

* * *
The Hollywood version of the Raj in The Rains Came is sometimes surprising, and sometimes quite conventional. On the whole, the film is relatively thin on offensive caricatures, and seems to lack any overt 'racial' theme. Many readers will be familiar with Hollywood stereotypes of India and eastern Asia, as found with everyone's favorite loin-cloth wearing sidekick, Sabu. It's an old mess: bad accents, servile postures, treachery, laughable mimicry, eye-popping religious devotion, and so on. (The only thing that saves old kitschy Sabu movies like The Thief of Baghdad is the Mexican bombshell Maria Montez, who happily hammed her way through a dozen 'Arabian princess' roles without ever modifying her thick Mexican accent!)

Oddly, both racism and kitch are mostly absent from The Rains Came. As mentioned above, Myrna Loy has an affair with a Native Doctor, Major Rana Safti (played by Nigel Bruce), and the cross-racial element goes almost without mention. Indeed, Bruce doesn't even attempt to approximate an Indian accent, nor is his make-up particularly 'dark'. He looks like a moderately tan Italian, and sounds like he's from Wyoming. When Loy first sees him at a dinner party, she describes him (to her husband, no less) as a "copper Adonis."

There is still an interesting charge associated with the romance, but not the kind of charge associated with breaking the racial taboo. Rather, it might be the other taboo Loy's character is violating -- she's married! To me, the treatment of their romance suggests that Hollywood is here not thinking of Major Rana Safti's brown skin as representing a meaningful racial divide, which is hard to fathom given that this was an era which was obsessed with such differences. (Think of the race-politics of Gone With The Wind, for example)

We might be able to interpret of the lack of controversy about The Rains Came as follows. First, keep in mind this was an era of strict racial divides in films with domestic settings (the ban on cross-racial romance in Hollywood was maintained at least up until Sidney Poitier and the 1960s; see this site for more details). Second, despite the ban there was still an intense (perhaps unconscious) interest in cross-racial themes amongst moviegoers, though audiences and censors would certainly have balked at any overt representation of white women and black American men. So one way to deal with the theme obliquely is to go 'Oriental': handsome white actors in gentle 'brown-face' rather than garish (and always disturbing) black-face, paired up with Hollywood's reigning starlets. To put it quite directly, white actors playing Indians (and perhaps Arabs and east Asians) are a kind of lighter substitute for African-Americans. Or we might say, with the adventure films of the 1930s and 40s, Hollywood simultaneously addresses and avoids its domestic race problem.

Well, it's a theory. The appeal of 'brown-face' is certainly not universal to Hollywood films dealing with India, from this era or the following ones. But it might also be in the air in the Ava Gardner film version of Bhowani Junction, in which Gardner plays a mixed-race Anglo-Indian who ditches her Anglo-Indian boyfriend, nearly marries a Punjabi Sikh, and then ends up falling in love with a full-blooded British soldier. All of her love interests in the film are played by white actors (in brown-face where appropriate). I've never actually seen the film, but I did read John Masters' novel a few years ago: as with Kipling's Kim, there is a sense that Gardner's character has to discover her true "whiteness," and eschew other possible racial destinies. In that sense, it's a little messier (meaning, more race-obsessed) than The Rains Came.

I'm curious to compare the 1939 film version of Bromfield's novel with the 1955 remake (The Rains of Ranchipur, with Lana Turner and Richard Burton). Do they make the racial barrier more of an issue, or keep all of that as is? Do they do more ethnic caricatures, or is that also kept to a minimum? Perhaps I'll report back once I've tracked these other films down.

Given that The Rains Came is almost completely skipping any attempt at authenticity or verisimilitude amongst the actors, it's still a bit shocking when some of the charaters start speaking in real (if slightly bowdlerized) Hindi at certain points in the film ("Bannerjee, mein jaldi vaapas aa jayega" "Sahib, mujhe nahin chayega"...). The sets are also pretty impressively desi; the latticework, moulding, and interior decoration is often pretty convincingly Mughal to my eye at least. A lot of effort clearly went into creating a visual sense of India, which is a surprise considering it's highly unlikely that anyone directly involved with the film actually went to India during the making of The Rains Came.

My guess is they got it from Bromfield's novel. Bromfield was an American writer who spent time in Paris and India in the 1920s, and wrote a series of novels set in those locales. There might well be a few phrases in Hindi in the book that the filmmakers picked up. Bromfield, incidentally, did write another novel about India, called Night in Bombay, though that was never made into a film. Bromfield -- yet another author to track down!
Posted by electrostani at 8:51 AM

Thanks for a fascinating discussion of the film and Bromfield. I was interested to read your thoughts on the 'brown' vs 'black' racial angle. I wonder if the 30's were a more open, bohemian, experimental moment in culture? And racism against Asians has had a slightly different flavour than the atavistic, 'primitive' images in which black characters were cast--I think that's a very credible argument. I would think the legacy of British Orientalist knowledge also had something to do with giving occasional shades of 'nobility' to the Indian character.
I visited Bromfield's Ohio farm many years ago. It is quite a disorienting experience to find directions to 'Malabar Farms' in the middle of rural Ohio. I thought at first that the word must have some other derivation rather than that this piece of Orientalia was suddenly dislodged to middle-America. The farm is a very beautiful and quiet place--hard to believe that Bogart and Bacall got married there--it's as removed from Hollywood glamour as it's possible to be. You can buy Ohio maple syrup and home-made fudge there!

Sorry to be slow to respond. As I understand it, the 1930s wasn't especially more progressive than, say, the 1920s, but film was in a transitional period. A lot of experiments were being tried and new ideas worked out as the 'talkies' came into dominance.

And while there wasn't much in the way of nudity and so on, the MPAA ratings system didn't exist yet. So certain 'art' films did push boundaries...

Cool that you've been to Bromfield's farm! (I'd be curious to know what brought you there) His life story seems really interesting.

When you wrote that Nigel Bruce played the role of the Indian doctor who was as handsome as adonis, I knew something was amiss. Nigel Bruce was British and played Watson in Sherlock Holmes movies (with Basil Rathbone as Sherlock).

Tyrone Power (a leading Hollywood star) played the role of Major Safti. He played roles of many ethnicities: Spanish, French, and here Indian and he never tried to fake an accent.

Rana is played by Tyrone Power, not Nigel Bruce. If you're going to go on at length about the "copper adonis" you should at least get the actor's name right.

Maria Montez did not appear in The Thief of Bagdhad. The princess was played by the English June Duprez.