Would You Pay $1.58 million for this painting? 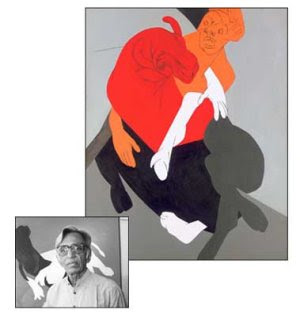 (Photo of painter and reproduction of Mahishasura from Rediff)

A bidder at Christie's New York recently did so, according to the Calcutta Telegraph. At $1,584,000, it is the highest price ever paid for a work by an Indian painter. According to the Mumbai Newsline edition of Express India, the painting, by Mumbai-based Tyeb Mehta, was purchased by an NRI in New York. It may be just the bad reproduction, but I don't find the painting terribly exciting. Here is the story behind it, according to Rediff:

Mumbai-based 80-year-old [Tyeb] Mehta's Mahishasura is said to be a work in karmic origami depicting the Hindu tale Goddess Durga slaying the demon Mahishasura. But Mehta has depicted Mahishasura a sympathetic figure embracing the goddess symbolising the demon's transformation after uniting with the divine.

I'm not quite sure I see it in the painting. But ok. A little more from Rediff on Tyeb Mehta:

Mehta is part of the Progressive Artists Group which draws inspiration from European masters but interprets Indian themes. He is said to be a very meticulous artist and is not as prolific as Indian master M F Husain.

There is a full profile of Mehta here. The same page includes an older version Mahishasura by Mehta.

There are higher quality reproductions of Mehta paintings here and here. 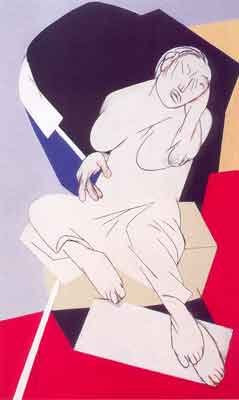 Posted by electrostani at 6:42 PM

I can never understand paintings properly. I agree there can be some good paintings but then I ocassionally think - whats all that fuss (& money involved) with paintings such as the Leonardo's Mona Lisa, Van Gogh's Sunflowers etc. Ones just a smiling lady and other a bunch of sunflowers in a vase (which reportedly is worth MILLIONS!!). Although Leonardo's 'The Last Supper' is VERY nice.

On the other hand - I do appreciate Michelangelo's work with Sistine Chapel. Thats amazing art! Taj Mahal is a work of art. I am sorry, I do not understand paintings though!

give me a good photograph over a painting ANY day...

This looks somewhat akin to Picassos works... I can hardly make out anything in the modern paintings...There is this story that a famous NY collector bought a painting and had hung it upside down till the artist happened to see it and tell him about it! Huh...

But I can understand the Renaissance masters... Da Vinci, Michelangelo, etc in whose paintings you can see the subtle facial expressions, the twitching of the nerves, the veins and all minutae...

Tyeb Mehta, one of the most media shy and respected painters, has been covered quite well on TOI's culture page.

Must say I have a different take on paintings that depict/reinterpret mythological subjects. Absolutely love Shuvaprasanna: