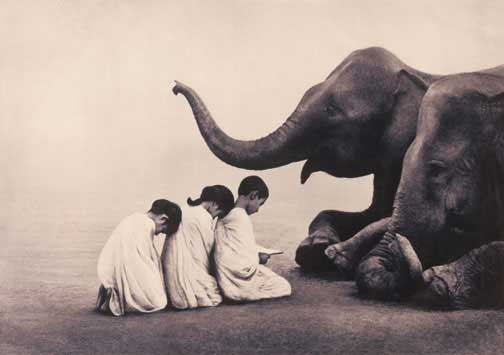 This spring, about half a dozen people, in separate instances, recommended that I see Ashes and Snow, an exhibition of photography by Gregory Colbert. It's at a "Nomadic Museum," a massive temporary building constructed out of storage containers, on Pier 54 in Chelsea. Judging by the hype and the marketing (I've seen posters for the exhibit up all over NYC), this has been the second "must-see" spectacle in New York this year. (The first being "The Gates," of course.)

The media and the blogosphere, as far as I can tell, have been very respectful of Ashes and Snow. Here is Kottke, and here is Richard's Notes (quite informative, actually). Even the excellent Tiffinbox, a professional photographer, seemed impressed with the idea of this exhibition.

I was not impressed. I was, to begin with, bored by the photography, which isn't all that impressive visually; the sepia-tinted pictures are pretty, but the "ethereal" effects can be faked with Photoshop. More importantly, I was deeply annoyed by the strong undercurrent of exoticism and artificiality in the exhibit. Ashes and Snow is the Discovery Channel with one addition: exotic-looking Indian and Asian children in flowy robes are dancing and swimming placidly with the exotic (and often dangerou) animals. They don't speak, they don't smile, and they don't complain. They are, in a sense, analogous to the animals -- not just silent "native others," but, in the logic of this exhibit, animals themselves. The exhibit notes and the website will have you believe that it's a statement about "harmony between animals and human beings."

But I don't buy it, partly because of the blatant artificiality of the poses -- people don't just hang out with Cheetahs on stark desert plains. And they don't swim with elephants with their eyes closed, looking enraptured. (Or, as in the photo above, they don't sit in a row reading while elephants sit, apparently listening.) All of these are poses elaborately staged by the photographer, and it's hard for me to forget it. The other reason I can't buy the statement about human-animal unity is the manipulative environment of the gallery, which is memorably designed, to be sure (see this on Shigeru Ban's approach to "sustainable architecture"). But the deeply recessed lighting, the exotic world music in the background, the pebbles, the rice paper -- the whole presentation, in short -- plays up a "spiritual" and "exotic" atmosphere that nullifies any objective quality the photographs themselves might have.

If you watch the video loop at the back of the gallery for a bit, a male voice starts reciting this mantra while a desi chick dances in the mud with a baby elephant:

"Flesh to fire, fire to blood, blood to bone, bone to marrow, marrow to ashes, ashes to... snow."

To which my response is:

"Cow to beef, beef to burger, burger to mouth, mouth to stomach, stomach to shit, shit to... snow."

Ashes and Snow was for me the equivalent of a traveling circus, only in pictures. It's the traveling circus in an era of political correctness ("no animals were harmed," etc.), and World Music you can buy Starbucks. But it's still a circus, and still, to me, rather repulsive.

Next up for Ashes and Snow is apparently Los Angeles, where I am sure it will be received by more wildly appreciative crowds, dropping $12 per person. Better go, while the circus is still in town.
Posted by electrostani at 8:08 AM

The circus won't be coming to my rice paddyfields but I must say that I loved your review. It made me laugh.

Very incisive review. Whether it's the zoo, or the circus or the false reverence of these photographs, it's a form of exploitation.

Hey, some of us in L.A. have some critical insight! Though admittedly it's not BECAUSE we are from L.A.

I hated it too. The photographs weren't actually photoshopped, but does that matter? it was pretty awful. And the only white guy you see in the exhibit is the photographer swimming with a whale! I don't want to degrade Freud with talking about that one. New York Times had a pretty scathing review of the show.

I'm not dissing L.A., or at least, not in particular.

Actually, I think this has been a big hit here, so clearly most New Yorkers (and affiliated tourists like myself) have no taste either.

Did you ever watch Kamal Hassan's movie, Appu Raja? That's pretty much all I have to say...

Personally, I found it to be the most beautiful exihibt I had ever seen. It is undoubtedly one of a kind, and the beginning of many more, I am sure. The photographer, in my eyes, truly captures the spirit and essence of the animals and humans like no other. There is a connection, a oneness, that no one has managed to convey as well as he has. His images are profound and deeply moving, touching, at a soul level.

I felt changed, inspired and deeply moved by the beauty and nature of his work.

Anonymous said...
This comment has been removed by a blog administrator.
12:42 PM