On Ageism in the English Department: Thoughts on "The Chair"

Upon watching the first few episodes of the new Netflix show The Chair, I was made uneasy in part because of the rampant ageism on display in the world of the show. The senior members of that fictional English department were shown to be woefully clueless, methodologically conservative, and clearly overpaid in light of how few students were enrolling in their classes. One old-timer was seen frequently napping in meetings and various public places; another is gently gifted Tranquility Briefs by his wife. The senior faculty are also on the verge of being forced into early retirement -- and the show, with its relentless mockery of their foibles, seems to support that at every step. 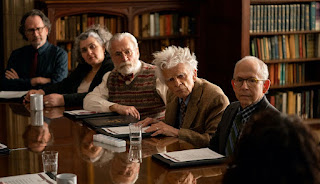 [Spoiler here] Happily, the show does correct itself somewhat by the final episode, as Joan Hambling, one of the senior members of the department whose dry courses on Chaucer are earlier mocked, is made chair when Ji-Yoon Kim is dethroned by a vote of no confidence. Joan also gets a spicy romantic side plot with an IT staff member, and the chance to deliver a spirited defense of Chaucer’s relevance to a student who’s been trolling her using vulgar misogynist language on RateMyProfessor.com.

So yes, The Chair eventually corrects course, but the presence of so much ageism show has gotten me thinking about ageism as a problem in academia in general -- and English departments more particularly.

First, I should say this: I started teaching as a young Assistant Professor at the age of 27, and I was at that time fairly guilty and unrepentant in my ageism.

It’s not that my doubts about senior colleagues were entirely unfounded. I did have some good relations with senior colleagues, including a couple who mentored me and who went out of their way to get me through a bruising tenure process. But I also encountered senior colleagues who, rather like the senior faculty on The Chair, simply did not know what to do with me, a turbaned Sikh excitedly spouting a mix of postcolonial theory and poststructuralism. There was one senior Victorianist who never said a word to me or even looked me in the eye -- for years! I thought he was anti-social or perhaps asocial until I later learned that other faculty members (who were, needless to say, white) had been invited to his house for dinner. Another senior colleague, a medievalist with a tendency, as I saw it, to be a bit "handsy" with young women in the department, had an endowed chair and presumably received the highest salary of any English faculty member. At a book release party for an edited collection he released shortly before retirement, he flippantly -- and repeatedly -- referred to Indigenous American people as “injuns.” As I remember it, no one objected or bothered to correct him (I didn't either -- I left the reception early). 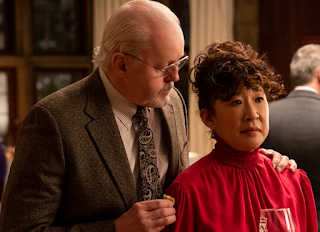 My mistake was not in being dubious about these particular colleagues -- very comfortably established figures at was a pretty conservative university, a place that, when I joined it in 2001, was not especially well-known for progressive humanities or social sciences scholarship. (It is very different now.)

My mistake was in thinking that there was a connection between the age of these colleagues and their tendency to espouse attitudes and methodologies that were retrograde, reactionary, or racist. What led them to be the way they were was not age, but longstanding, unexamined privilege.

It’s now twenty years later, and while I am not yet the caricature of the absent-minded older professor seen in The Chair, I am approaching it. It’s been strange to become essentially invisible as a senior faculty member, strange to feel overlooked even at a time when I am, I believe, much better at doing my job than I was when I first started out. This mid-career invisibility is, I think, in part a reflection of a pervasive and largely unchallenged tendency towards ageism in academia.

1. It’s not ok to nudge senior faculty towards retirement along the lines of “time to get out of the way & make room for the next generation.” Yes, there is a generation of recent Ph.Ds who have received the short end of the stick with respect to a collapsing humanities academic job market. But this is a huge structural problem, and retirement won’t fix it. (One thing The Chair gets wrong is when the Dean promises Su-Yoon that she’ll be able to hire exciting women of color candidates once the “old guard” retires. In many departments, due to declining enrollments, retiring faculty are not actually being replaced, or if they are, it's by contingent, non-TT faculty.)

2. It’s not ok to presume that senior faculty have retrograde views about race, gender identity, or other issues related to social justice. Keep in mind that a faculty member who is 60 years old today probably got their Ph.D. in the late 80s or early 90s -- an era when feminist theory, queer theory, critical race theory (in its first instantiation), poststructuralism, and postcolonial theory were very much in their heyday. English professors who are 60 years old today are, quite possibly, to the left of their students on many substantial social and political issues.

Admittedly, some may struggle a bit with changing terminology, but use of a somewhat obsolete* term doesn’t make someone necessarily racist or transphobic. Give people a chance to correct themselves, learn, and grow. Help them get there.

3. It’s not ok to discriminate against applicants for positions in your department, including in graduate admissions, on the basis of age. It’s also not ok to look at applicants for a tenure-track position who got their Ph.D.s more than five years ago and disqualify them on that basis. Ph.D. degrees do not have expiration dates.

4. It’s not ok to assume that people who are older are averse to technology. As above, people who are 60 today were probably using MS-DOS when they first started out, a notoriously difficult operating system. If anything, today’s technology is much more user-friendly and easy to use than what we had in the early 1990s. We all struggle to keep up, especially with evolving phishing and malware attacks, protecting ourselves from identity theft, the proliferation of passwords, etc. Let’s not presume that age is that much of a factor here.

5. It is true that senior faculty sometimes are repositories of wisdom with respect to picking your battles & figuring out how to survive the punishing culture of academia.

6. It is true that faculty who have less busy research schedules, including senior faculty who have entered into what I call “mid-career invisibility,” sometimes have more time to dedicate to mentoring their students than faculty who are traveling a lot to present their research and dealing with many urgent publishing deadlines.

7. It is true that having time to develop deep period expertise counts for something. People who have been doing it a long time can draw from a broader range of materials when it comes to graduate and undergraduate advising. They are more aware of points of friction, possible mine-fields.

8. Personally, I’ve now read all of the major George Eliot and Virginia Woolf novels; I’ve read all of Toni Morrison. When I started out as a teacher, I was a long way away from that. It would be wonderful if our profession found more ways to reward people for knowledge that runs deep, and not just arguments that are punchy or Tweetworthy.

Posted by electrostani at 11:52 AM